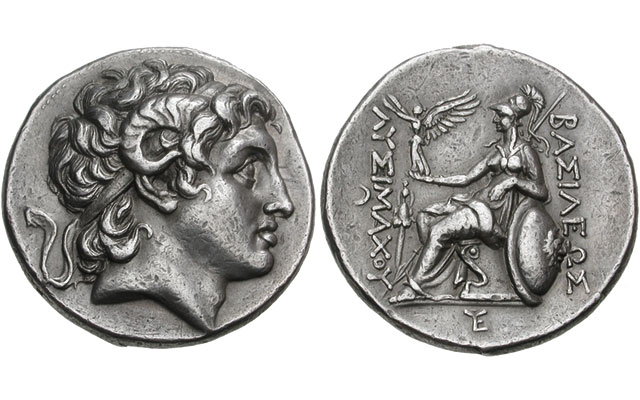 When he controlled Pergamum for King Lysimachus, Philetaerus struck this silver tetradrachm that names Lysimachus and portrays the deified Alexander III. 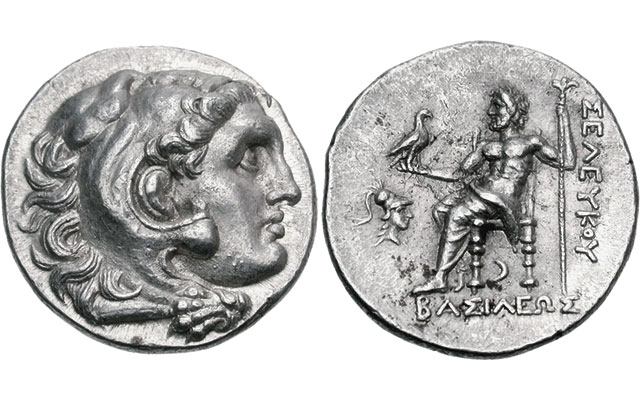 This tetradrachm of circa 279 to 274 B.C. bears the designs of Alexander III and the name of Seleucus I, yet was issued by Philetaerus while in alliance with Antiochus I. 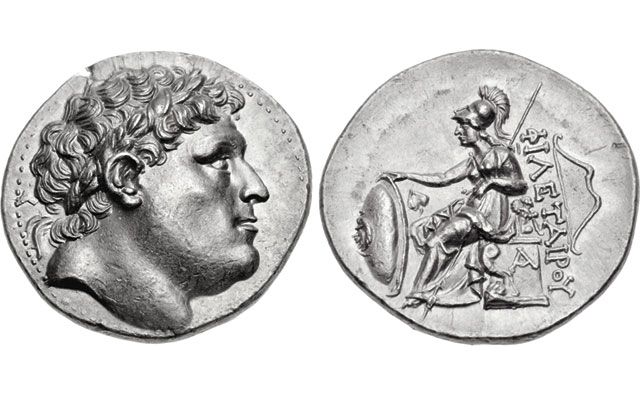 Eumenes I (263 to 241 B.C) honors his uncle and predecessor Philetaerus with a boldly styled portrait. The reverse shows the seated figure of the goddess Athena. 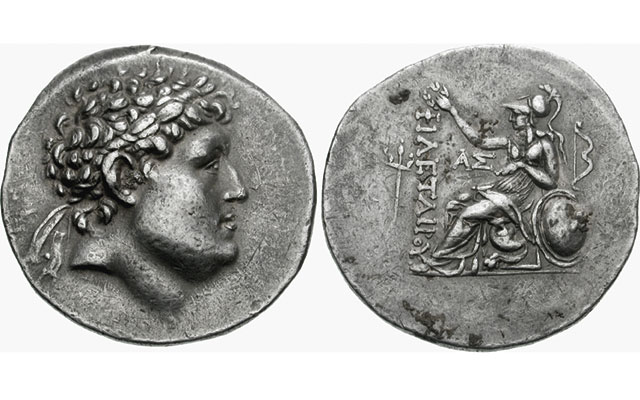 Eumenes II (circa 197 to 159 B.C.), a later king of Pergamum, issued this tetradrachm. It imitates those of his predecessors, though with a different sense of artistry. 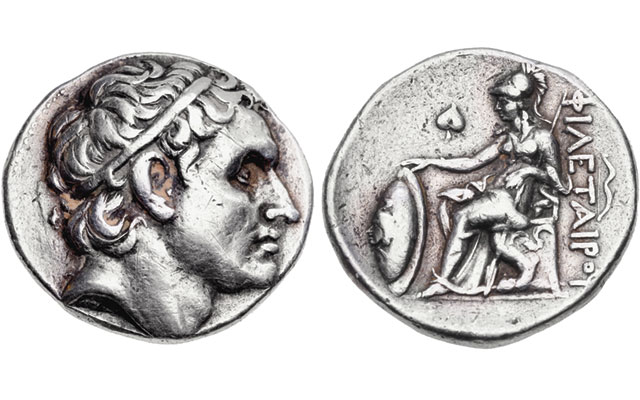 Philetaerus honors King Seleucus I with a fine portrait of his deceased benefactor on this silver tetradrachm. Philetaerus’ name appears on the reverse, behind figure of Athena.

The city of Pergamum, set upon a fortified hill in the heart of Asia Minor, played an important role in the Hellenistic Age (circa 350/336 to 30 B.C.) of Greek history.

For about 150 years this city and its “kingdom” were ruled by members of the Attalids, a hereditary dynasty that — oddly enough — was founded early in the third century B.C. by a eunuch, Philetaerus.

After the death of Alexander III “the Great” (336 to 323 B.C.), whose conquests had brought much of Asia Minor and the Near East under Greek control, a persistent struggle resulted among his successors (the diadochi) to rule the vast territories he had conquered.

A strong Greek presence had been in Asia Minor (largely modern day Turkey) since the eighth century B.C., though principally it was limited to colonies along the coast. With the conquests of Alexander, Greek influence reached much further inland, safely encompassing the city of Pergamum. Soon after 301 B.C. the city came under the control of the Thracian King Lysimachus (305 to 281 B.C.), who chose to store there a great treasury of silver.

Lysimachus entrusted the city and its riches to a Paphlagonian man, Philetaerus, who as a toddler had been so severely maimed in an accident that he was made a eunuch. By the time the king met Philetaerus, he was a proven commander who held a position of great authority in Pergamum. He must have exhibited good personal qualities, as the notoriously suspicious and stingy Lysimachus handed over to him control of the city and its treasury.

As steward of Pergamum, Philetaerus struck coins for Lysimachus beginning in about 287 B.C. They were of the familiar type that had been introduced by Lysimachus at this time: the obverse had a portrait of the deified Alexander III and the reverse showed the goddess Athena enthroned, holding a figure of Nike (Victory).

Philetaerus remained loyal to Lysimachus until dynastic infighting created an atmosphere of uncertainty and suspicion. In 284 B.C., Lysimachus’ third wife, Arsinoe II, is thought to have eliminated Lysimachus’ eldest son, Agathocles, who had been born to his first wife, to clear the path of inheritance for her own three sons by Lysimachus.

In this terrifying environment, many of Lysimachus’ subjects revolted, and Philetaerus — fearing for his own safety — offered his allegiance in 282 B.C. to Seleucus I, a Macedonian king whose realm was based in Syria. His bid for self-preservation bore fruit after Seleucus I defeated and killed Lysimachus in 281 B.C. at the Battle of Corupedium.

For the time being, Philetaerus kept control of Pergamum and its treasury, but events moved quickly. A few months afterward, his new benefactor, Seleucus I, was murdered, succeeded by his son, Antiochus I (281 to 261 B.C.), who presumed that he would inherit the loyalty that Philetaerus had shown his father.

It is difficult to say what coins were struck by Philetaerus during the complex period 282 to 280 B.C. One silver tetradrachm, perhaps struck in 281 B.C., shows on its obverse the bridled head of a horse adorned with horns, and on its reverse a standing elephant.

It would also appear that by 280 B.C. Philetaerus was producing silver tetradrachms that showed the head of Heracles and the seated figure of Zeus, copying the familiar type that about a half a century earlier had been introduced by Alexander III.

The first of these tetradrachms were truly “anonymous” since they employed both the designs and the name of Alexander. Only their mint symbols linked them to Pergamum, and thus to Philetaerus. The anonymous tetradrachms were followed up with an issue that was identical except that they bore the name of the deceased Seleucus I. These coins bearing the name of Seleucus I usually are attributed to the period circa 279 to 274 B.C.

Like the times in which they were struck, they are complex: they use the designs of Alexander III and the name of Seleucus I, but were issued by Philetaerus while he was in alliance with Antiochus I. Thus, one might pronounce this issue as a “coin of four kings.”

Perhaps another five years passed before Philetaerus began to strike his next tetradrachms, which consisted of two issues of the period circa 269 or 268 to 263 B.C., just prior to when Philetaerus died and was succeeded by a nephew, Eumenes I (263 to 241 B.C.).

One of the types shows the portrait of the deified Seleucus I and an enthroned Athena that is derived from the popular issues of Lysimachus. This was yet another powerful statement of Philetaerus’ loyalty to the deceased Seleucus I.

Concurrently — or perhaps following the first type — Philetaerus appears to have struck tetradrachms with an identical reverse, but with the portrait of Philetaerus himself. These were the first coins in a large and impressive series that, until recently, had been attributed entirely to Philetaerus’ five legitimate successors: Eumenes I, Attalus I (241 to 197), Eumenes II (circa 197 to 159), Attalus II (160 to 138) and Attalus III (138 to 133).

This first issue of tetradrachms with the head of Philetaerus is distinctive in that it is adorned with a plain diadem (crown) that is identical to the one on the head of the deified Seleucus I on the contemporary series.

The remaining Philetaerus portrait tetradrachms, all struck after the founder’s death in 263 B.C., betray an evolution in details and composition of both Philetaerus’ crown and the figure of Athena. The style and fabric of the tetradrachms also evolve, with increasingly lower-relief engraving and broader, thinner planchets.

Perhaps the most remarkable aspect of this coinage is that every member of the dynasty honored the founder Philetaerus on their coins. Except for a single issue of tetradrachms of Eumenes II, which is exceedingly rare and must have been a singular commemorative, all tetradrachms struck in the Pergamene Kingdom portray the dynastic founder Philetaerus, and bear his name rather than that of the issuing monarch.