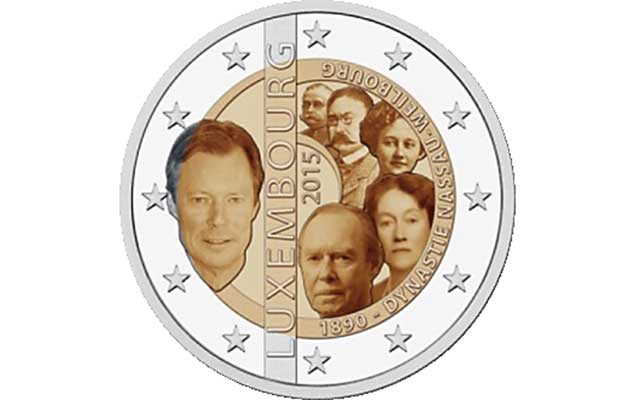 Luxembourg’s newest commemorative €2 coin marks the 125th anniversary of the House of Nassau-Weilburg, the governing family of the tiny, wealthy nation.

Luxembourg’s newest commemorative ringed-bimetallic €2 coin marks the 125th anniversary of the House of Nassau-Weilburg, the governing family of the tiny wealthy nation.

A total of 1.4 million coins are to be issued some time in August, according to an announcement published July 16 by the European Commission.

The obverse of the coin bears the commemorative design, with elements separated by the nation’s name in text on a vertical bard. The name appears at a right angle in relation to the other design elements, with most of the inscription contained with the confines of the core (the first and last letters instrude into the outer ring as does the bar on which they rest).

On the left of the coin is the effigy of Grand Duke Henri; the portrait lies mostly in the plane formed by the core of the coin, though a tiny portion intrudes into the differently colored ring.

On the right, situated entirely within the core in a circular arrangement and in chronological order of their accession to the throne, are the portraits of the Grand Dukes Adolphe and Guillaume IV, Grand Duchesses Marie-Adélaïde and Charlotte, and Grand Duke Jean. To the right, also in circular format and at the outer frame of the core, is the inscription 1890 – DYNASTIE NASSAU-WEILBOURG.

Each nation using the euro is allowed to issue as many as two circulating commemorative €2 coins annually, with joint issue programs like the 2015 European Flag €2 coin to be released late this year not counting toward the maximum.

Some nations issue the maximum, while other nations have never issued a circulating commemorative €2 coin (Ireland, for instance, will issue its first in 2016).