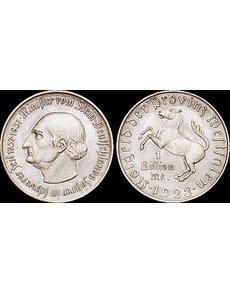 The 1-billion-mark notgeld coin issued by the Landesbank of Germany’s Province of Westphalia has fascinated collectors since it first appeared in the spring of 1924. Measuring 70 millimeters in diameter and bearing the date 1923, this massive coin presents a distinctive bust of Prussia’s Napoleonic era statesman Karl Freiherr vom und zum Stein (born 1757, died 1831), designed by Professor Rudolf Bosselt of Braunschweig (Brunswick).

The obverse hails Stein as “Germany’s Leader in more Serious Times,” while the reverse presents the prancing white horse of Westphalia. Stein was a key figure in the small band of dynamic patriots whose drastic reforms saved from utter ruin what remained of King Friedrich Wilhelm III’s Prussia, defeated and dismembered by Napoleon.

This legend implies that the defeated Germany of 1918 might be saved by similar heroic effort.

This Westphalia notgeld spanned the denominations from a mere 50 pfennigs all the way to 50 million marks, and was struck by five firms in aluminum, tombac and bronze. A few portrayed Westphalia’s poetess Annette von Droste-Hülshoff (born 1797, died 1848), frustrated lover of Friedrich von Schiller.

All have plain edges and the large pieces were called Ruhrdukaten and were sold for the relief of German passive resisters to French and Belgian occupiers in the Rhine and Ruhr.

The late dean of German catalogers, Kurt Jaeger, cited Fritz Reissner’s 1940 opinion that all Westphalian issues were really “medal-form remembrance pieces with denominations. ... By Spring 1923 they were worthless at their face values.” Many, indeed were distributed in provincial schools to highlight protest against foreign occupation of the Rhineland.

The issue price for the 1-billion-mark pieces was 2.50 reichsmark in the new currency after the catastrophic inflation had ended. The firm of Heinrich Kissing in Menden struck 11,113 pieces, of which 500 were issued in goldplate.

Many American collectors are awed sufficiently by the figure billion and fail to realize that in the German language, “billion” is actually the American “trillion.” The German equivalent of our billion is “milliard.” A small difference there!

The billion mark’s popularity has generated some counterfeits for the collector market, and caution is, as always, recommended.