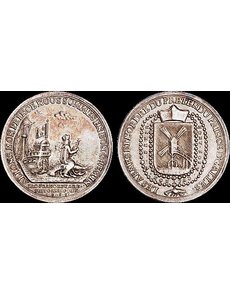 German satirist Christian Wermuth’s medal suggests that the baby baptized James Francis Edward was actually the son of a commoner and substituted for a child either stillborn or a girl.

Its obverse shows a Jesuit priest riding an immense lobster, holding a star-crowned newborn baby. A French ship sails left with French legend translating to “Let us go, my Prince, we are on the right road, James Francis, Supposedly Born June 20, 1688.”

The reverse presents the arms and order of the pretended Prince of Wales, a shield bearing a windmill crowned with a Jesuit biretta and a rosary in place of the Order of the Garter with bowdlerized motto, HONY SOIT QVI BON Y PENSE, “Evil to Him who thinks good of it.” The pendant is another lobster.

All of these elements relate to the ouster of Britain’s King James II.

Religious concerns roiled 17th century England. The Stuarts were restored in 1660 under merry monarch Charles II, who had many illegitimate offspring, but no son able to succeed him. The throne passed to his brother James Duke of York, a Catholic convert of monumental obstinacy who also had no son to succeed him.

James had two Protestant daughters by his first marriage. His second wife, the Catholic Mary of Modena, became pregnant in 1687, causing intense concern among Protestants fearing emergence of a Catholic dynasty and already shaken by James’ demands for toleration of Catholics and nonconformist Protestants. The premature birth of the baby baptized James Francis Edward called for other steps than revolt. Whig opponents devised stories impugning the legitimacy of the king’s inconvenient newborn son. They claimed that the baby prince was a changeling, purportedly the son of a miller, smuggled past 60 witnesses into the queen’s birth chamber in a long-handled warming pan, replacing a child either stillborn or a girl.

A handy villain was the Jesuit priest, Father Edward Petre, the king’s confessor and member of the privy council.

Wermuth wove symbols of each part of the libel into his medal. Petre and the lobster recalled the tale that Jesuit founder St. Ignatius Loyola once dropped his prayer book in the sea, only to have it returned to him by a lobster.

Protestant nobles invited James’ daughter and her Dutch husband to reign jointly as William III and Mary in what was called the Glorious Revolution. James sent his queen and newborn son to refuge with French King Louis XIV. Failing to recover his throne, he retired to his miniature court in exile at Saint Germaine-en-laye outside Paris, dying in 1701. His descendants continued to claim the throne until 1807. Wermuth’s medal survives to skillfully encapsulate the turbulent events of 1688.

David T. Alexander is author of American Art Medals, 1909-1995 and a fellow of the American Numismatic Society. He is a longtime numismatist and researcher.