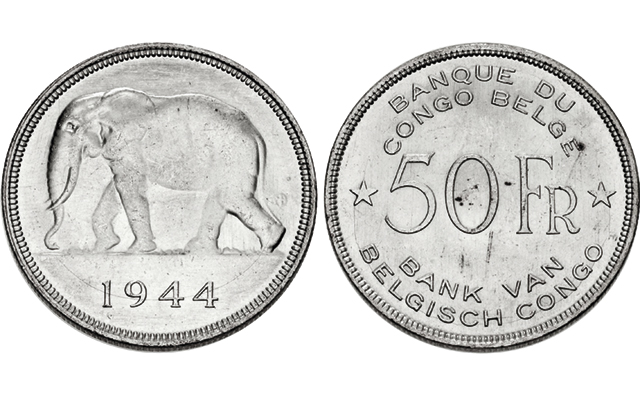 No example of the 1944 silver 50-franc coin of the Belgian Congo is graded higher than this Mint State 64 example. All coins in the Richard Lissner Collection were submitted to Numismatic Guaranty Corp. for grading. 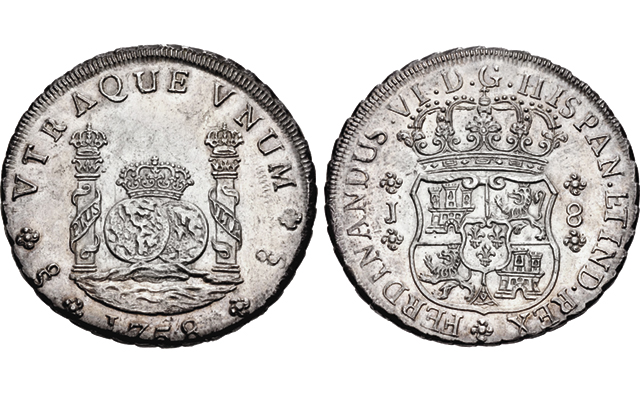 The Santiago Mint in Chile issued very little silver coinage, so this 1758 Pillar dollar or 8-real coin is consequently rare. 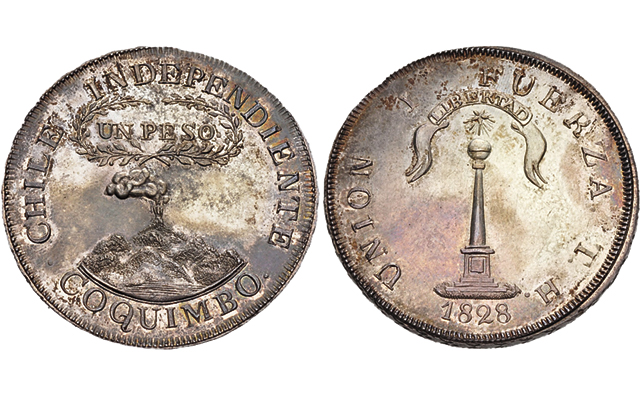 Instead of shipping silver to Santiago, a mint was established in the city of Coquimbo. This 1828 silver peso is the later, Fine style, and one of 14 examples known.

A collection of coins being offered at auction in Chicago Aug. 1 and 2 is notable for its breadth of coins that are rare in high grades.

Many of the coins are estimated at $500 or less, but in some respects, it is a collection where the rarity in such high grades may render those estimates moot. Bids on some examples in popular areas like Indian and Asian coins have already reached multiples of the estimates after just a few days of bidding.

All of the coins were submitted to Numismatic Guaranty Corp. for grading, and the Lissner pedigree is included on the certificate inside the holder.

Some of the coins have received designation from World Identification and Numismatic Grading Service (WINGS), which applies gold stickers on those coins that meet the firm’s “standard of excellence.”

According to the auction firms, Lissner was “an American connoisseur” who assembled his collection over more than 40 years, focusing on “exceptional quality, rarity, and pedigree.” The collection has an estimate totaling more than $2 million.

A number of interesting, historical and important coins are offered in the sale. Here we highlight three coins from colonial efforts around the globe, representing multiple price points.

One of the potentially more affordable pieces in the auction is a Mint State 64 1944 silver 50-franc coin of Belgian Congo, estimated at $400.

No examples of this coin are graded higher than MS-64, according to the firm.

The colonial African coin is the last crown-sized coin of the Belgian Congo, and is popular for the strolling elephant on the reverse and the fact it was struck at the Philadelphia Mint.

The opening bid of $320 has been reached as of July 9, but bidding is far from over; for comparison, an About Uncirculated 53 example realized $588 (with 18 percent buyer’s fee) in Ira & Larry Goldberg Coins & Collectibles’ June 1 auction.

Lissner’s collection abounds with South American rarities, possibly none more iconic than the 1758 silver 8-real coin struck at the Santiago Mint in Chile under King Fernando VI of Spain.

The Santiago Mint struck little silver coinage, and was predominantly used for gold coin production, so all silver coins from the mint are rare.

The Pillar dollar, as the 8-real coin is also know, features the famous “Pillars of Hercules” design that gave the denomination the name “Pillar dollar.”

Graded MS-61, the coin is reportedly the only Mint State example graded for the type and the highest grade Santiago Mint Pillar dollar ever graded. Estimated to realize $50,000, the piece was struck slightly off-center and exhibits a few contact marks in the obverse fields.

A significant jewel in the crown of the Richard Lissner Collection, and Lissner’s favorite South American coin, is the 1828-TH silver peso of “Fine style” of Coquimbo.

These coins were struck at the mint in the city of Coquimbo some 300 miles north of Santiago during the early stages of the Chilean Republic. The distance to Santiago made local striking necessary, and a mint was authorized in 1827, with Gregorio Cordovez as mint master.

When the Santiago Mint failed to send supplies necessary for the manufacture of dies, assayer and engraver Theodor Hagen created his own for his initial trial strikes of issues from the new mint.

The Coquimbo Mint also struck very little silver coinage, and its output was less than the larger Santiago Mint.

The peso is a “major rarity and strongly desirable piece for collectors of Latin American and World crowns,” the auction house said.

After making two trials (in June and November), samples were shipped to the Santiago Mint for inspection but were rejected for their lower than expected fineness and crude engraving and execution.

These issues are dubbed the “Crude type.”

The installation of a screw press in late 1829, and hubs and punches prepared elsewhere, led to issues of a finer style, dubbed the “Fine style.” The finer issues weren’t made for long before production was interrupted by the Chilean Civil War of 1829 and 1830, and the mint was looted.

Today, no more than 14 examples of the “Fine style” peso are known, with one in the British Museum and one in the Banco de Chile collection.

Printed catalogs are available for $75 in the United States and $100 worldwide. A digital catalog may be viewed online at the firm’s website, at www.cngcoins.com.