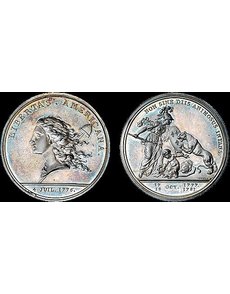 Benjamin Franklin sponsored the Libertas Americana medal, designed by Augustin Dupré. It is ranked the No. 1 piece in 100 Greatest American Medals and Tokens by Katherine Jaeger and Q. David Bowers.

Last week I mentioned that in today’s era of the Internet, cyberspace and instant access to information, a lot of numismatics is faceless and computerized — prices, mintages and the like.

If as you read these words you decide you would like to build a collection of Morgan silver dollars from 1878 to 1921 — one of my all-time favorite series, by the way — you could spend two or three hours on the Internet and find perhaps half of the nearly 100 different major dates, Mint marks, and varieties listed in my A Guide Book of Morgan Silver Dollars.

Of course, you would get a mixed bag that would include “low-end” coins or those with poor eye appeal. For 90 percent of today’s buyers, a certified Mint State 65 dollar that is poorly struck and unattractive is a better coin than an MS-63 coin that is sharp and beautiful. Numbers are first and foremost. Numismatic knowledge? No longer needed.

For the other 10 percent of buyers, a great appeal of numismatics is the thrill of the search — seeking pieces of interest and then tracking them down. Many opportunities along the way do indeed require intellect, research and effort, and yield a reward in satisfaction. The secret is to find paths that are not often taken.

Most who have done this have stayed with the hobby for many years and also have profited greatly when, eventually, their collections were sold.

Take the field of collecting known as “Betts medals.” In 1894, American Colonial History Illustrated by Contemporary Medals was published, the work of C. Wyllys Betts.

The book described and often illustrated hundreds of different medals struck in America and Europe that related to aspects of the Americas in early times. Spanish galleons laden with gold and silver are delineated as are early American settlements, scholars and scoundrels, wars and treaties.

Included is the famous Libertas Americana medal by Augustin Dupré, depicting on its obverse a woman with a Liberty cap on a pole, and on the reverse an allegory relating to the former dominance of England over the American colonies. Voters landed this in the No. 1 spot in Whitman’s 100 Greatest American Medals and Tokens book. Benjamin Franklin sponsored its creation.

To read about this medal is to want to own one, if you can afford it. While the Libertas Americana medal is valued into the thousands of dollars, other Betts medals can be bought in the low three figures, some for less than $100.

Each of the different Betts medals has its own story to tell.