Lexington Collection has silver coin from ‘Year of Six Emperors’ 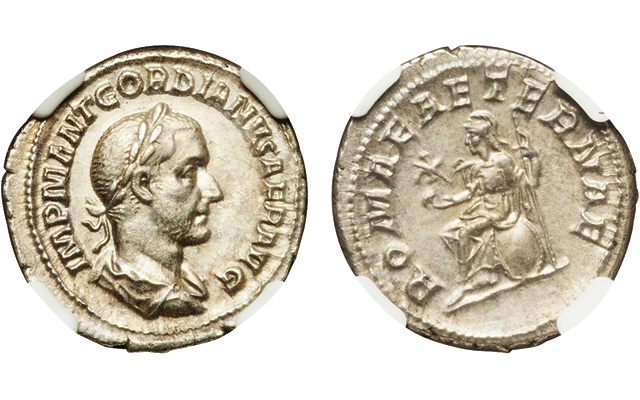 A silver denarius of Gordian I represents the short-lived tenure of the emperor in Rome’s African province. He served with his son, Gordian II, for less than a month. Tabs from the holder for the coins show in the images.

One of those emperors, Gordian I, was caught up in the revolt against Maximinus. After a mob killed the procurator in the Roman province of Africa, Gordian I on March 22 was beseeched to serve as emperor, and he adopted the cognomen Africanus. He was approved by the Roman Senate on April 2. His son, Gordian II, served with him.

Their reign was short.

Capelianus, nemesis of Gordian I and ally of Maximinus, invaded the province. Gordian II died in that year’s Battle of Carthage, and his father committed suicide later the same day, April 12.

Though their reign was short, the quality of their coins is notably high, creating an “enduring mystery” about whether the revolt had actually been carefully planned, or the production of coins continued long after their reign.

Graded Choice Extremely Fine ?, Fine Style by NGC and designated 5/5 for both strike and surface, the Kern Collection example is estimated to realize $5,000 to $6,000.