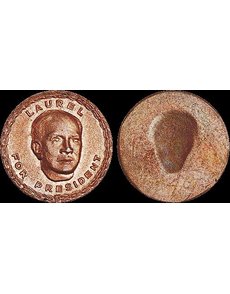 Uniface copper, 20.1-millimeter medalet depicts José Paciano Laurel, president of the wartime Republic of the Philippines. The piece was possibly intended to be inserted into a political badge when he ran again for president in 1949.

At first glance, the uniface copper, 20.1-millimeter medalet is a perplexing political piece bearing neither date nor name of its country of origin. It shows a double-leaf border, a relatively high relief facing head and the legend LAUREL FOR PRESIDENT. The reverse is blank, as the piece was obviously made to be inserted in a larger political badge (the piece is from the American Numismatic Society Collection, gift from Mrs. Eleanor Perez Niles).

Collectors of Philippine coins and medals may recognize the portrait as Dr. José Paciano Laurel (born 1891, died 1959), Philippine jurist and politician, best remembered as president of the wartime Republic of the Philippines, 1943 to 1945. Laurel appeared on three 44-millimeter medals struck for the wartime republic that have been studied and published by this columnist in Numismatic Scrapbook Magazine and the American Numismatic Association journal, The Numismatist.

A Supreme Court justice under the Americans and the Commonwealth of the Philippines established in 1936, Laurel was among many officials left behind after the Japanese invasion and the fall of Bataan and Corregidor in 1941 and 1942.

The new republic lasted less than three years. Quezon died in New York state in 1944 and was succeeded by Sergio Osmeña.

After the American return, more than 5,000 Filipinos were charged with collaboration with the enemy.

Only a handful of accused Filipinos were actually convicted. While Laurel faced 132 counts, he was never brought to trial nor convicted. Many supporters worked for his complete rehabilitation.

Independence came on July 4, 1946, after a split in the long-ruling Nacionalista Party of Quezon and Osmeña.

The first president was Manuel Roxas of the new Liberal Party. Roxas died in office and was succeeded by Elpidio Quirino, who ran on his own in 1949.

Quirino proclaimed victory, but Nacionalistas, independent Filipinos and foreign observers agreed that this close election may have been decided by electoral fraud on an unprecedented scale.

David T. Alexander, is a Senior Numismatist and researcher for Heritage Auctions, davida@ha.com. He is
author of American Art Medals, 1909-1995.