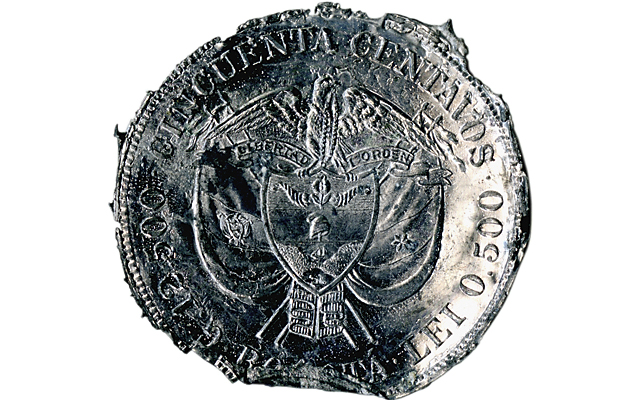 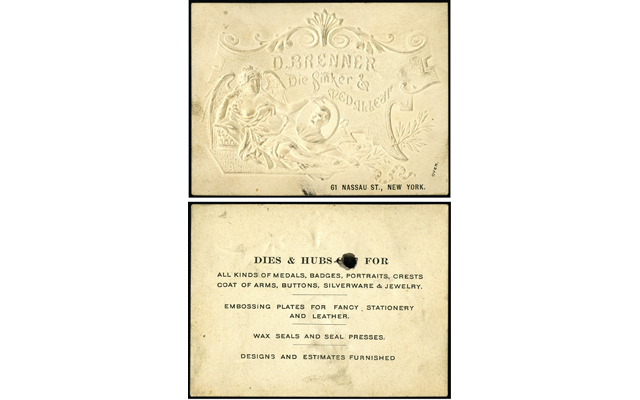 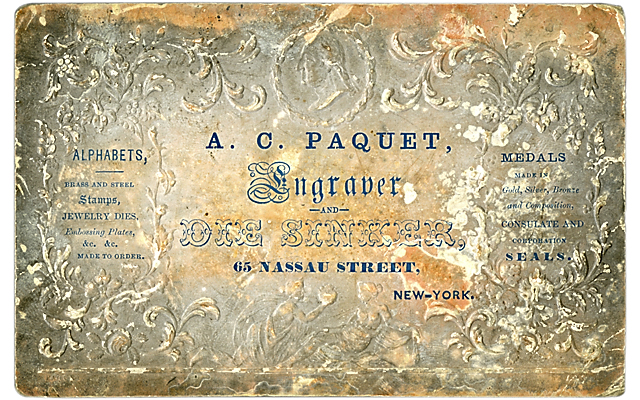 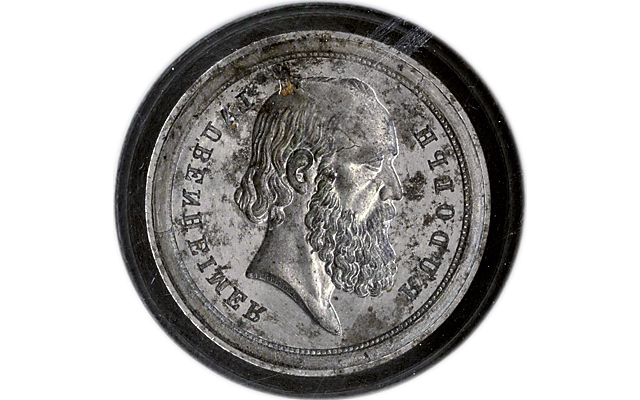 Circa 1870s to 1890s blind embossing die was used by Laubenheimer for letterhead as well as business cards. 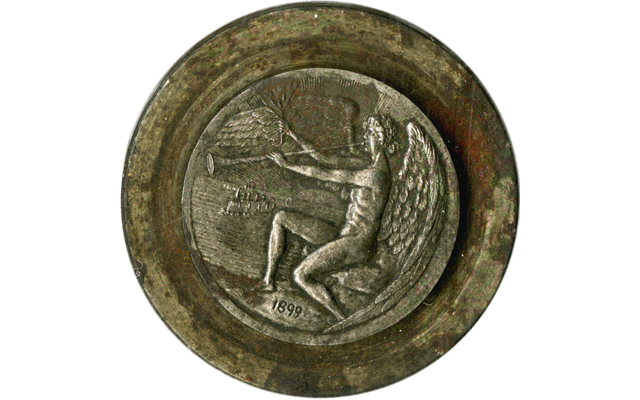 Steel hub for one side of a Spanish American War or Admiral George Dewey medal depicts an angel with trumpet seated on boulder at right, with a battleship in the distance. 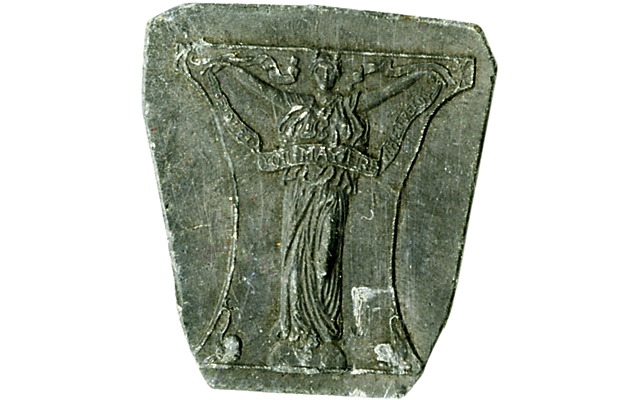 An 18 percent buyer's premium will be added to the closing price of each lot won.

Among the items being offered in the sale:

??Laubenheimer's own blind embossing die used for his letterhead and other printed materials.

Nassau Street in New York City was the central location for artisans plying their trade as die sinkers, engravers and medalists. Paquet, an assistant U.S. Mint engraver notable for the Paquet, Tall Letters Reverse for the Coronet gold $20 double eagle in 1861 and numerous U.S. Mint medals, plied his trade at 65 Nassau St. The circa 1860s to 1870s business card Laubenheimer executed for Paquet has his name appear as A.C. Paquet. The uniface Paquet business card offered carries a pre-sale estimate of $250 to $500.

Brenner, recognized most prominently as the designer of the Lincoln cent, conducted his business from 61 Nassaut St. The circa 1890 to 1905 dual-sided, engraved and embossed  business card offered identifies Brenner on the face as D. BRENNER Die Sinker & Medallear. The design features a reclining female holding an oval portrait. The card's back details for which items Brenner could cut dies and hubs. The card offered carries a pre-sale estimate of $250 to $500.

The circa 1870s to 1890s blind embossing die with a pre-sale estimate of $750 to $1,500 features Laubenheimer's incuse portrait with his name inscribed around. The steel die has a 35-millimeter impression area that Laubenheimer used for letterhead as well as business cards.

With a pre-sale estimate of $200 to $400, the Spanish American War or Dewey Medal hub features a 36-millimeter design face with a 50-millimeter base. The design face of the steel hub features an angel with trumpet seated on a boulder at right. A battleship is visible in the distant sea. The date 1899 appears below,

Another Dewey-related item is a circa 1900 to 1905 lead die splash depicting Victory standing on a globe with her hands outstretched, holding a ribbon bearing Dewy's famous statement, "Gridley, you may fire when ready." The 30 by 34-millimeter uniface piece has a pre-sale estimate of $80 to $160.

A die splash is the result from testing a die often using an irregularly shaped piece of metal to receive the uniface impression.

The Laubenheimer sale includes a uniface, irregularly shaped 30-millimeter essay lead die trial splash for the reverse of an 1886 Columbia 50 centavos coin. The piece exhibiting a new rendering of the country's national arms is unlisted in the Standard Catalog of World Coins. The piece has a pre-sale estimate of $100 to $200.

More information on the sale can be found on the Archives International Auctions website.

Rudolph P. Laubenheimer, Engraver, Die Sinker and Medailleur, was one of the leading representatives in the United States in his field from 1858 until his death in 1905. His services were in demand in the United States as well as Canada, Central and South America in which he designed and made dies for postage stamps and postal stationery including the noteworthy 1870 U.S. Postal Stationery series in which he received a commendation from the U.S. Post Office Department for exceptional work.

Rudolph’s prolific career spanning 5 decades included designing and fabricating dies for the state seals of New York, Virginia, Maryland, Washington and North Carolina; medal and die designs for the 1876 Centennial Exhibition in Philadelphia; a number of medals and other objects related to the 1892-93 Columbian Exposition as well as dozens of other medals and decorative designs for numerous events, topics and causes. He designed, engraved, created dies and fabricated coins for Colombia; coats of arms; works on paper including his production designs for medals as well as die production for medals, jewelry dies, decorative object, embossing plates, various badges, belt buckles including ones for the military, seal presses, bookbinders stamps, numerous cameo corner cards and business cards, Lithography work, portraits including many of his friends, still life drawings and paintings and various designs and images used in his craft as well as hundreds of other related items that have never previously been offered to the collecting public. On his card he has printed “Only the finest and most artistic work is executed and all orders are filled without delay.”

Rudolph Phillipp Laubenheimer was born in Germany in a small ancient walled town of Meisenheim am Glan in Hesse-Homburg on July 11, 1833, as the second youngest of seven boys to Christian and Frederica Laubenheimer. His family had been established in this town since before the 1750’s. He exhibited a talent for drawing and painting and due to the inheritance laws at that time, the oldest brother would be the sole heir of his family’s estate. In order to place him in a position that could lead to a trade or career and better to develop his talents, his family sent him to Holland and apprenticed him as an engraver. At the age of 17 he decided that the United States offered better prospects in his field and he traveled to Havre, France, to voyage to the U.S. aboard the sailing vessel “William Tell” on May 18, 1851. The ship was one year old and made the trip in the relatively fast time of 26 days. He drew numerous portraits of the crew members and the ship on his way over, which are included in this offering. He landed at the Battery in New York with 3-½ dollars of foreign silver in his pocket. (This information came from a notebook he carried with him detailing elements of his voyage and experiences.)

After he arrived in New York, he proceeded to improve his English and eventually began his career in the engraving firm of John Hoole Sr. with whom he worked for a number of years until he became more familiar with the English language and decided to establish his own office as Die Sinker and Medailleur in 1858 at 6 John Street. Over a period of years he moved to 54 Barclay Street and his office for the last 25 years of his life was at 243 Broadway, opposite City Hall Park. He received his citizenship papers in 1866.

Rudolph also was an accomplished musician, composer and vocalist who joined the German singing society “Liederkranz," then in its infancy in the early 1850’s, and as a young member sang in the Maennerchor,  in which he made many lifelong friendships including one with William Steinway of Steinway Piano fame, who also came to the United States around the same time period. Rudolph spent his leisure hours drawing and painting as well as being proficient on the piano and spending many hours improvising and composing as he played. His special love was for the cello. He composed many pieces for the piano as well as for trios including the cello.

In 1863, Rudolph married Miss Henrietta Zimmer of No. 27 Fifth Avenue, the daughter of a Lutheran minister. He proceeded to have 5 boys, 3 of whom died in their infancy and one at 12 years of age. His only surviving son, Ernst Laubenheimer, who fortunately provided most of the details of his father’s life for this biography, was an accomplished lithographer and commercial artist and designer who spent many years with the American Bank Note Lithography Department.

Rudolph died due to an accident on February 25, 1905, and his final resting place was in the family plot in the Old Lutheran Cemetery in which he had designed his own monument.