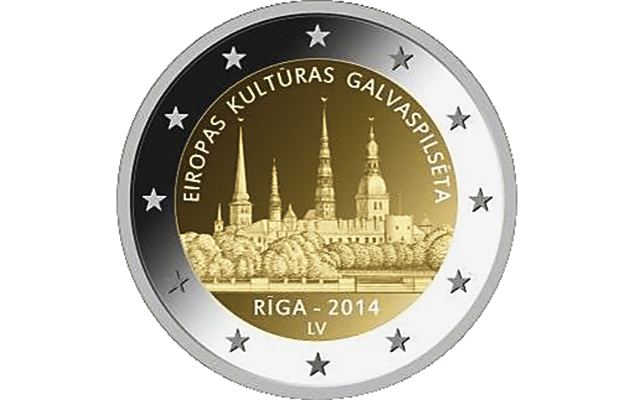 Latvia's first circulating commemorative €2 coin, due for release in early fall, will celebrate the capital city, Riga, which has been dubbed the European Capital of Culture for 2014.

The coin, due for release in early fall, according to the Latvijas Bank, marks Riga’s turn as the European Capital of Culture for 2014, a mostly symbolic honor. The European Commission lists the coin's release date as September.

The coin features a panoramic view of the Old Town, the historical and geographical center of Riga on the right bank of the Daugava River. Inscriptions on the coin translate to identify the city and its honor as European Capital of Culture. The coin was designed by Henrihs Vorkals and sculptured by Janis Strupulis.

In total, 1 million coins are due for release, with 5,000 of those struck in Brilliant Uncirculated condition and designated for collector sales in souvenir boxes.

Every year since 2012 eurozone members have been allowed to issue up to two circulating commemorative €2 coins annually (before that, from 2004 forward the limit was one special design). Joint programs like the 2012 series marking the 10th anniversary of the circulation of euro coins and bank notes do not count toward that maximum.

Some nations, like Ireland, have not commemorated any special themes with circulating commemoratives, while others, like Finland, issue the special designs annually.

These circulating commemorative coins are struck to the same specifications as the regular €2 coins and carry the standard European reverse design. The ringed-bimetallic €2 coin has a copper-nickel outer ring and a nickel-brass center. The coin weighs 8.5 grams and measures 25.75 millimeters in diameter.

These circulating commemoratives are legal tender throughout the euro area.