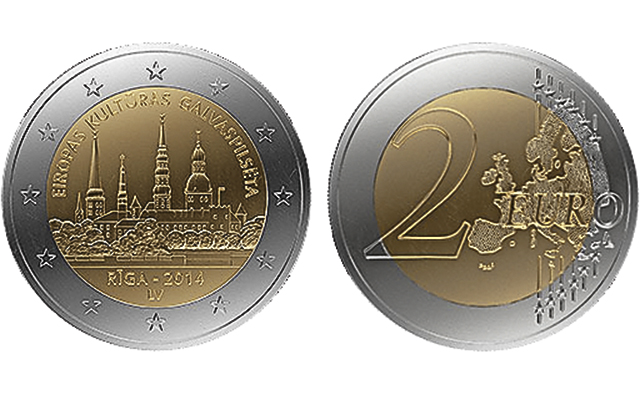 Latvia’s first circulating commemorative 2-euro coin celebrates the nation’s capital city of Riga being named a European Capital of Culture for 2014. A graphic model of the design appearing here does not replicate the true colors of the 2-euro coin.

The newest country in the eurozone has issued the newest circulating commemorative €2 coin.

Each year the European Union designates a city or cities in the EU as the European Capital of Culture, and numerous actitivies are scheduled to showcase the national and European culture.

The central image of the coin shows the skyline of Riga and the historic center of the city (which is included in the list of  UNESCO World Heritage Sites).

The coin includes the inscription EIROPAS KULTURAS GALVASPILSETA (which translates to "European Capital of Culture"), the name of the celebrated city and the year of issuance, RIGA — 2014. The coin’s outer ring depicts the 12 stars of the European flag.

Henrihs Vorkals designed the coin and Janis Strupulis modeled the coin, which was struck at the Staatliche Münzen Baden-Württemberg in Germany. The same mint also struck Latvia’s circulating euro coins.

The new coin is the same specifications as other €2 coins, weighing 8.5 grams and measuring 25.75 millimeters in diameter.

The ringed-bimetallic coin has a silvery-colored outer ring of copper-nickel, around a center disk that is golden colored, created from layers of nickel-brass, nickel and nickel-brass.

The central part of the reverse carries the number denomination and a map of Europe.

The edge of the coin carries a Latvian inscription translating to “God bless Latvia,” with stars separating the words.

Each country in the eurozone may issue two €2 commemorative coins per year, featuring designs and themes of their choice.

Additionally, eurozone countries may produce a third €2 commemorative coin, provided that it is issued jointly under an EU project to commemorate such events as an EU or European Monetary Union anniversary.