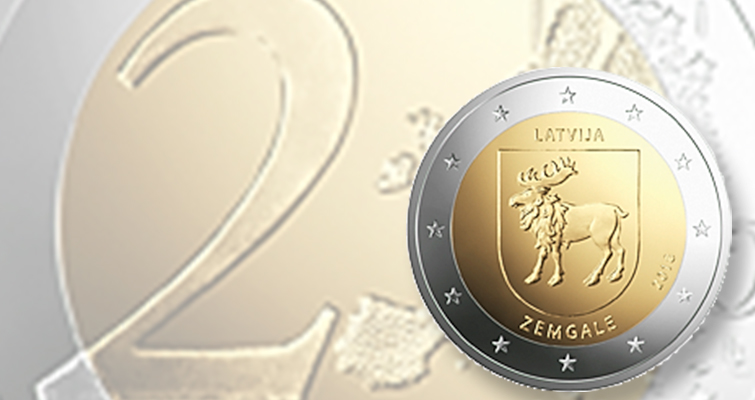 Latvia’s series of four €2 coins for the nation’s regions concludes with this issue, for Zemgale.

The 2018 coin dedicated to the Zemgale region, released Sept. 26, closes the series. The cultural and historical region coin series was one of Latvijas Banka’s contributions to the centenary of Latvia.

The division of Latvia into four cultural and historical regions is stipulated the Constitution of the Republic of Latvia.

The symbols incorporated in the regions’ coats of arms, adopted April 26, 1930, are related to historical developments in the present-day territory of Latvia.

In 2012, a special law established legal protection of these coats of arms as national symbols.

The coat of arms of Zemgale features a silver elk on a blue background, presented, without color, on the coin’s obverse. The reverse features the common map design for all €2 coins.

In total, 500,000 of the Zemgale coins are being issued, with 7,000 coins available in Brilliant Uncirculated condition in various packaging options, which are for sale online via Latvijas Banka’s product site, http://www.e-monetas.lv.