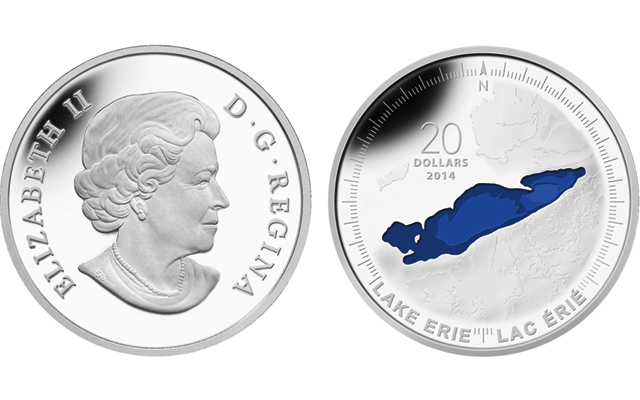 The third coin in a series of Proof silver $20 coins featuring the five Great Lakes shows Lake Erie. The coin was released June 3.

The third Proof silver $20 coin in a series depicting the Great Lakes was released June 3.

The Royal Canadian Mint’s newest coin features Lake Erie and, as with earlier issues, the reverse of the 2014 coin features an interpretation of a bathymetry map of the lake replicated by Royal Canadian Mint engravers and highlighted with colored enamel. The lake depths are each selectively frosted so each difference is clearly visible through the watery blue enamel on the reverse. Surrounding the lake are compass degrees, and the name of the lake appears in both English and French.

The RCM relied upon Canadian Hydrographic Service data for the map.

The fourth largest of the Great Lakes in terms of surface area, Lake Erie is the smallest in volume. It is hydrologically supplied by the three upper Great Lakes — Superior, Michigan, and Huron — as well as Lake St. Clair and the St. Clair River, and drains into the Niagara River and the Welland Canal. The Point Pelee peninsula on Erie’s northern shore is the most southerly mainland point in Canada.

The obverse of the coin features the effigy of Queen Elizabeth II by Susanna Blunt.

The coin weighs 31.39 grams, measures 38 millimeters in diameter and has a mintage limit of 10,000 pieces, the same as earlier issues.

The first coin in the series, for Lake Superior, was released Nov. 12, 2013, though dated 2014. The second coin (for Lake Ontario) was released March 4, 2014. The final two coins will honor Lake Huron and Lake Michigan, with the Michigan coin to be issued in October 2014 and the Huron piece in February 2015, according to the RCM.

Both Gatewest and Talisman offer the coin for $99.95 U.S.