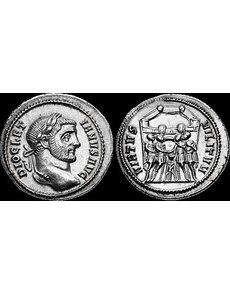 This argenteus of Diocletian is among the first struck for his monetary reform of circa A.D. 294. The reverse shows him and his three co-rulers sprinkling incense over a tripod before a fortified city. 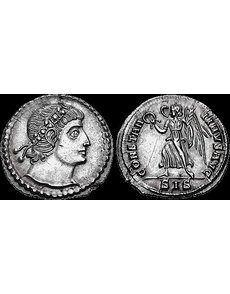 The head of Constantine I “the Great” is shown on this siliqua struck at the Siscia Mint in about A.D. 334. The reverse shows Victory advancing. 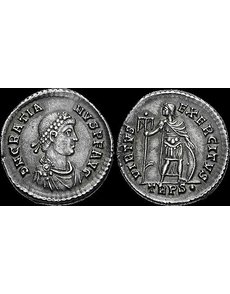 This miliarensis was probably struck for ceremonial distribution early in the reign of Gratian (A.D. 367 to 383). The emperor is shown on the reverse in a military pose. 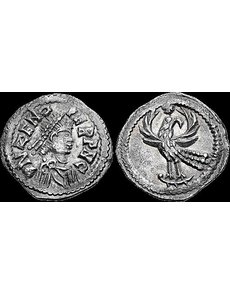 Sometime after he wrested control of Italy from the Romans, King Odovacar struck this half-siliqua at Milan in the name of the Eastern Roman Emperor Zeno (A.D. 476 to 491).

Collectors delight in the general availability of these coins, which were issued for nearly seven centuries. For a surprisingly modest price, one can assemble a large collection with a wide variety of types from the Roman Republic through imperial times.

Most Roman silver coins were struck from about 212 B.C. to the A.D. 350s, after which the silver content of Roman coins dropped precipitously. An empire-wide financial and military crisis prevented any true silver coins from being struck for at least two generations, and what little remained in circulation was withdrawn and secreted away.

Silver coins of the Late Roman Empire are much scarcer than their predecessors. They first were struck in about A.D. 294, when the Emperor Diocletian (A.D. 284 to 305) reintroduced silver coinage to the Roman economy. These were dime-size coins of very high purity — the equivalent of a silver denarius of nearly 250 years before.

Today this coin is generally called an argenteus, though there is no good basis to believe that was its name in antiquity. They were struck at 96 to the Roman pound, and some rare argentei explicitly advertise this fact with the reverse type of a wreath containing an inscription XCVI, the equivalent of 96. Normally, however, the reverses showed either the gateway of a military camp or four emperors sprinkling incense over a tripod before a fortified city.

Diocletian’s heavy-handed approach to regulating the economy backfired, as the principles of Gresham’s Law (bad money drives out good money when their relative valuations are set artificially) were set into motion. Argentei were rapidly exported in trade to the East or were hoarded. Surviving argentei usually are in Superb condition because few of them saw much, if any, circulation.

Argentei were struck only for a few years, and were succeeded in about 312 by some debased examples, which are not common.

Half-argentei were only issued on rare occasions, and seem to have been ceremonial pieces.

Coins of the same purity and weight as the original argenteus were reintroduced by Constantine I “the Great” (A.D. 307 to 337) in about 324. This version, normally called a siliqua, looks different than Diocletian’s argenteus, as it was struck in lower relief on broader, thinner planchets.

For reasons that may never be known, the siliqua was a comparative success and was struck in fairly large quantities for more than a century. It may be that its official value was not rigidly tied to other coins and to goods and services, as Diocletian had mandated.

The original weight of 96 to the pound was maintained for the siliqua until A.D. 355 or 356, when the Emperor Constantius II (A.D. 337 to 361) reduced it by about one-third, producing them at 144 to the pound. Though with the passage of time the actual weights were often lower than the ideal, this “post-reform” weight remained the theoretical target for minting.

Roman silver coinage in this late period was struck at mints throughout the empire, from London in the West to Alexandria and Antioch in the East. The coins bear Mint marks to distinguish the products of different minting facilities, and even different emissions within a series. Though the busts of emperors tend to be formulaic, the reverses can be quite varied within the expected range of Late Roman propaganda.

Along with the siliqua, a half-denomination was also struck, though in much smaller quantities. Like the half-argenteus, it seems to have been a ceremonial coin. However, after about A.D. 474, when the Western Roman Empire was nearing exhaustion, it became popular in Europe as a regular coinage.

Later issues of half-siliquae were produced by various “barbarian” nations, including the Ostrogoths, Vandals and Lombards, as well as by Byzantine emperors during the brief periods in which they reclaimed parts of the old empire in the West.

Siliquae saw broad circulation throughout the empire, and were used in Britain, the westernmost Roman province, where the edges often were clipped. This clipping has been seen as a necessary (though unofficial) effort to reduce the weight standard of these coins in response to the increasing rarity of silver. Curiously, this phenomenon is not noted as strongly elsewhere in the empire, where silver must have been more plentiful.

A larger silver coin, called a miliarensis, was the more substantial companion of the siliqua in this late period. Like the siliqua, the first examples were struck by Constantine I, though from the start they probably were intended as money-medallions rather than as coins in the strictest sense. Though they definitely circulated, most surviving examples bear little wear, leading to the belief that they were special-occasion issues.

The miliarensis was struck to two weight standards: a heavy version at 60 to the pound and a light one that seems to have been issued at 72 to the pound. The target weight of the heavy miliarensis appears to be confirmed by a document and also by the letters LX (the equivalent of 60) that appear on some early examples.

The field of Late Roman silver coinage is rounded out with especially large silver pieces that can only have been intended as medallions. One early issue was made for Constantine I in celebration of his two capitals, Rome and Constantinople. These heavy, thick medallions resemble silver tetradrachms issued by Greek kings five and six centuries before, though they appear to have been struck for the dedication of the new capital of Constantinople on May 11, A.D. 330.

The successors of this initial effort were more in keeping with the times, being struck on comparatively broad, thin planchets. The weights for silver medallions vary considerably, and seem to have been reckoned in terms of multiples of the siliqua or the miliarensis. The heaviest example known was struck under Theodosius I (A.D. 379 to 395) at the mint of Antioch; it weighs nearly a third of a Roman pound. As such, it was equal to about 24 light miliarenses or 48 light siliquae, but more to the point, it may have been intended as the silver equivalent of one solidus, the standard gold coin of the empire. ¦