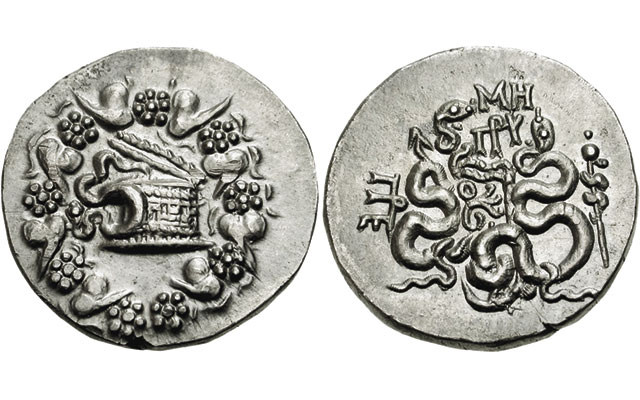 The Romans used the traditional designs of the cistophorus for their earliest issues, including this one, of Pergamum, sometime under Roman authority circa 85 to 76 B.C. 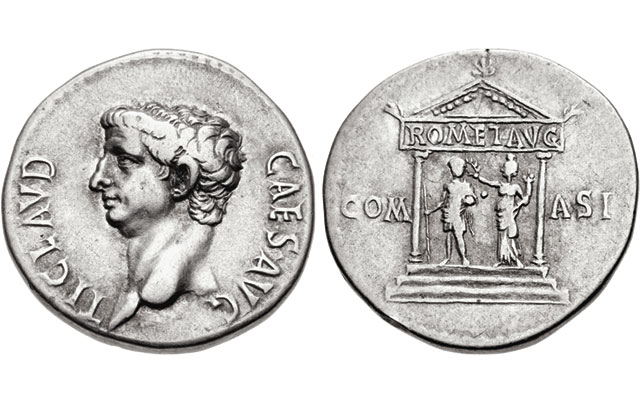 This cistophorus was issued at Ephesus early in the reign of the Emperor Claudius (A.D. 41 to 54). It bears his portrait and a temple dedicated to Roma and Augustus. 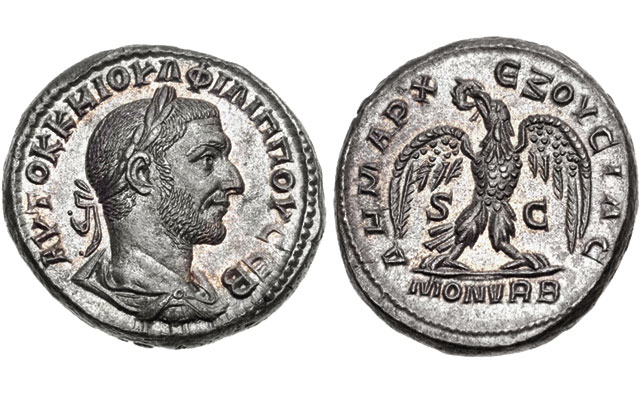 Antioch was the most important Syro-Phoenician mint. The dies used to strike this billon tetradrachm of Philip I (A.D. 244 to 249), however, may have been engraved in Rome. 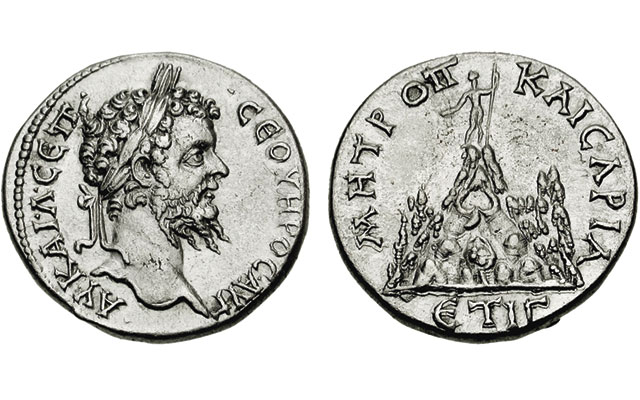 Most Roman silver coins of Caesarea, including this tridrachm of Septimius Severus (A.D. 193 to 211), show on their reverse Mount Argaeus. 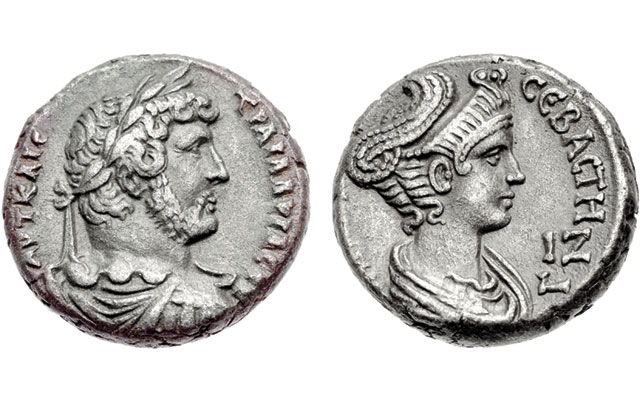 Most coins struck for use in Rome’s provinces were made of copper or one of its principal alloys. None are known in gold, yet some large and important issues were struck in silver or in billon (a composition of debased silver).

Because of their precious metal content, these silver and billon coins constitute a wholly different category than base metal issues.

The great majority of silver and billon coins issued in the Roman provinces belong to one of four categories: cistophori, Syro-Phoenician tetradrachms, the issues of Caesarea in Cappadocia or the coins of Alexandria in Egypt. Each category is distinctive and worthy of a separate discussion.

The cistophorus, a silver coin of three drachms, is thought to have been introduced sometime between circa 180 and 167 B.C. by the Pergamene King Eumenes II (who reigned from circa 197 to 159 B.C.). They were struck in very large quantities by this king and his successors, and large-scale production continued after authority in that kingdom passed to the Romans in 133 B.C.

The name “cistophorus” is derived from the obverse design of the Pergamene issues: a basket (the cista mystica) from which a snake emerges. The Romans retained that original design until about 48 B.C., with the last of these issues bearing the names of imperators, proconsuls, quaestors and praetors who were operating in Asia Minor.

From about 39 to 18 B.C. cistophorus production resumed on a large scale under the warlord Marc Antony (who died in 30 B.C.) and his nemesis Octavian, who continued to strike them after assuming the name Augustus and becoming Rome’s first emperor (27 B.C. to A.D. 14).

Nearly 60 years later, the Emperor Claudius (A.D. 41 to 54) struck another substantial issue. About a generation later, in circa A.D. 80, production once again began on a large scale, lasting for nearly 20 years.

Starting in A.D. 128 or 129, the Emperor Hadrian (A.D. 117 to 138) issued a very large number of cistophori using as his planchets old, worn pieces he withdrew from circulation. They were struck at numerous mints throughout Asia Minor, with the variety of reverse types being nothing less than extraordinary. Thereafter, cistophori were issued only sparingly with the last ones being struck by the Emperor Gordian III (A.D. 238 to 244).

This category of coinage is broad and varied in both the number of mints and the span of production, yet there is a great consistency in design, for the obverses feature the portrait of a member of the ruling family and most bear on their reverse a standing eagle. Some extraordinary bust styles and distinctive reverse types are found within the series, but those issues are rare and uncharacteristic.

At least 28 mints have been identified in this series, issued throughout the great swath of land spanning Mesopotamia in the north and Palestine in the south. Included are issues struck on the island of Cyprus, and we might add five mints in Cilicia, a region that neighbored Syria, for they also produced major issues of tetradrachms over a long period, notably during the reign of Hadrian.

Interestingly, at least 20 of the Syro-Phoenician mints struck tetradrachms only in the period A.D. 215 to 218. Their purpose seems to be a Roman military campaign against the Parthians that occurred during the reigns of Caracalla (A.D. 198 to 217) and Macrinus (217 to 218). Their silver is debased, and they are most accurately described as billon coins.

The most important mint in this group was Antioch in Syria, which issued tetradrachms under Roman rule from the first century B.C. through A.D. 253. The output was great, being more than all the rest of these mints combined. The other important mint was Tyre in Phoenicia, which followed up its familiar series of “shekels” (many of which were struck under Roman rule) with a variety of Roman-style issues.

One of the most prolific mints for Roman provincial silver was Caesarea, a city formerly called Mazaca or Eusebia. This remote city on the Anatolian plateau had in earlier times been the capital of the Kingdom of Cappadocia, and it later became a valued Roman stronghold in the Near East.

Its silver coinage in the Roman era began with Archelaus (36 B.C. to A.D. 17), a king who ruled Cappadocia on behalf of the Romans. He died early in the reign of the Emperor Tiberius (A.D. 14 to 37), at which point Roman-style coinage commenced. It continued through about A.D. 242. In general, the silver content of these coins is consistently high.

The Caesarea Mint is noteworthy for the wide range of its silver coin denominations, including hemidrachms, drachms, didrachms, tridrachms and tetradrachms. The tridrachm was equal to a cistophorus, the most popular denomination in Asia Minor. Each of these coins was tied to the Roman Imperial coinage system, in which the denarius was the principal silver coin.

Though many distinctive and interesting designs occur on the silver coins of Caesarea (especially under the Julio-Claudian emperors), most bear an image of Mount Argaeus, the towering geological feature of Cappadocia. The scene has many variants, offering a real challenge for collectors. A number of coins once attributed to Caesarea are now thought to have been struck at Bostra in Arabia and at Cyrene in Cyrenaica.

Egypt was one of the most valued of Rome’s provinces due to its enormous grain harvests, upon which the city of Rome relied to feed its inhabitants. The warlord Octavian (Augustus) recognized this, and when he acquired Egypt in 31 B.C. he kept it essentially as a private possession.

The first “silver” coins struck by the Romans in Egypt were heavily debased tetradrachms of the Emperor Tiberius dated to the period A.D. 20 to 21. This launched one of the most impressive series of ancient coins, which would be struck regularly for about 275 years. Accompanying these billon coins was an even more varied series of bronzes.

The weight and purity of Alexandrian billon coins declined consistently over that long period. The average tetradrachm of Tiberius’ first issue weighed about 13 grams and was about 30 percent silver. By the end of the series the weight of these coins had dropped by nearly half and they contained less than 2 percent silver. Despite the notable decline of its products, Alexandria was a survivor, for it outlasted all other provincial mints by 20 years.