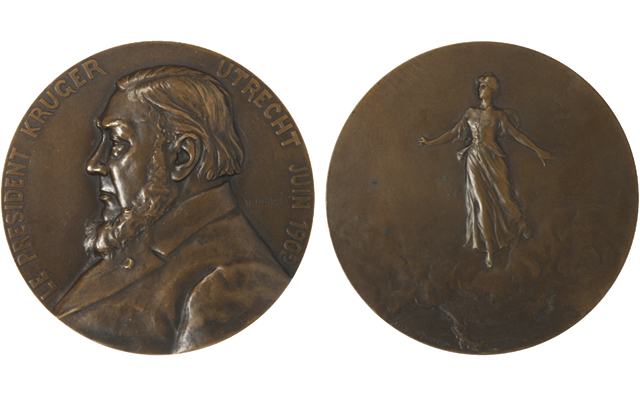 South Africa’s Stephanus Johannes Paulus Kruger is depicted on this 68-millimeter medal produced one month after the last Boer resistance ended with the Treaty of Vereeniging on May 31, 1902.

Recalled by more coins and medals than any other African, Stephanus Johannes Paulus Kruger was born in 1825 on the frontier of European settlement in Cape Colony, South Africa. Familiarly called “Oom Paul,” he became a major player on the world stage before his death in 1904, though some collectors know him only from the South African gold bullion coin bearing his bust, the Krugerrand.

At his birth, his Dutch-speaking Boers were beginning their ox wagon trek across territories that became Natal, the Orange Free State and the Transvaal. Virtually all Boers belonged to the Dutch Reformed Church or its branches, including the fundamentalist Christlijke Gereformeerde Kerk, known as the Doppers for their determination to snuff out (dop) new ideas. The Bible was essentially their only book, which Kruger found ample, believing that it taught that the earth was flat.

Kruger ultimately served as leader in the first Anglo-Boer war that restored the independence of the Transvaal (officially the Zuid-Afrikaansche Republiek, South African Republic) after British annexation in 1877. The republic was soon transformed by vast Witwatersrand gold discoveries and the arrival of British and other newcomers (called Uitlanders, or Outlanders) who threatened to swamp the Boers.

The Second Anglo-Boer War followed (1898 to 1902) and the heroic resistance of the vastly outmanned Boers attracted the admiration of Europe and America. The aged Kruger was sent abroad and was feted across Europe, made the subject of many medals cataloged in 1973 by Matthy Esterhuysen in Commemorative Medals in Honour of President S.J.P. Kruger in the Possession of the National Cultural History and Open-air Museum, Pretoria.

Many of these medals were inexpensive souvenir pieces, but one of the most imposing was the 68-millimeter tribute of the French Republic, created by artist Henri Dubois (born 1859, died 1930). Its obverse presents a frock-coated bust facing left with bushy beard without mustache, with legend LE PRESIDENT KRUGER – UTRECHT JUIN 1902. This was one month after the last Boer resistance ended with the Treaty of Vereeniging on May 31, 1902.

The allegorical reverse shows a Boer maiden walking into a brilliant sky over dark clouds of war obscuring South Africa, where British concentration camps still held thousands of Boer women and children. The edge bears the Cornucopia-BRONZE edge mark of the Paris Mint. The exiled president died in Switzerland July 14, 1904, and was later buried in Pretoria, soon to be the capital of united South Africa.