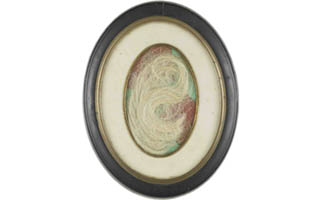 Among the more interesting items in the archive was a lock of Augustin Dupré’s hair housed in an oval wooden glazed frame.

An archive of various items from Augustin and Narcisse Dupré realized $351,000 at an April 2 Bonhams auction in New York City. It was purchased by researcher, dealer and Coin World  columnist John Kraljevich Jr.

The Frenchman Augustin Dupré, who lived from 1748 to 1833, is perhaps best known to U.S. collectors for creating the Libertas Americana medal, which was an important influence in early U.S. coin design.

Kraljevich was the sole bidder on the lot, and said that, although he was surprised there wasn’t more competition for the archive, the fact that the archive had so many different types of items made valuation tricky.

The collection included historical documents, numerous drawings, a group of medallions, coins and numismatic material, and other miscellaneous items including modern items added in the past several decades.

“While the numismatic material is very interesting from an academic perspective, much of the dollar value is in the autograph letters from Thomas Jefferson and Benjamin Franklin’s grandson William Temple Franklin,” Kraljevich said.

He doesn’t expect that he can keep the entire archive intact, but hopes to keep parts of the archive intact that make sense from a historical perspective. “For example, there’s material from Augustin Dupré’s son Narcisse that might have been from a biography project that was never published. I’d like to see that material remain together and potentially end up in an institution.”

This group appears to be what remained after other parts were sold to institutions including the Boston Public Library, the American Philosophical Society and several French institutions.

“The last of the chunks of Dupre’s archive to be sold was sold to the Boston Public Library in 1888! None of this has been available in the last century,” according to Kraljevich.

Among the noteworthy items are drawings that have numismatic significance, but others have broader importance. Kraljevich said, “The drawings are particularly fascinating. For example, the archive includes what appears to be the earliest version of the Great Seal of the United States in private hands, along with other important drawings that show Dupre’s design process.”

Paul Song, director of coins and medals at Bonhams, said in a post-sale press release, “It was a tremendous honor to offer the collection of Augustin and Narcisse Dupré after so many generations within the family. I am particularly pleased the archive was offered in its entirety, preserving this master engraver’s legacy.”