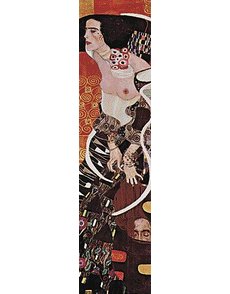 The story of Judith II (Salome), who saved the Israelites, is told through Klimt’s painting named for her. 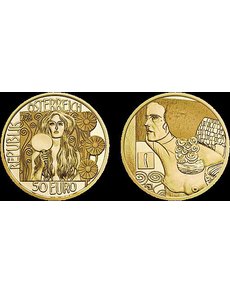 The Austrian Mint’s five-coin series honoring artist Gustav Klimt continues in 2014 with a coin showing a portion of Nuda Veritas on the obverse and a portion of Judith II (Salome) on the reverse.

The latest design for a gold coin series from Austria honoring artist Gustav Klimt reveals much about Klimt’s famous fascination with females.

It’s also a bit revealing in another sense.

The obverse of the 2014 gold €50 coin depicts a portion of Klimt’s early painting Nuda Veritas (or “Naked Truth”). The reverse shows the upper section of a painting simply known as Judith II.

The new .986 fine coin, which becomes available Feb. 19, is the third in a five-year series honoring the famous Austrian artist. Several of Klimt’s works have commanded record prices in the art market over the past decade.

Each coin in the series includes a letter of Klimt’s last name on the reverse, and so this, the third coin, shows I, the third letter.

Nuda Veritas, on the obverse of the coin, was completed in 1899.

In the portion seen on the coin, flowing locks of hair frame the woman’s face and cover her torso. She holds a mirror in her right hand.

Scrolls and flowers fill the background, with the nation’s name in German and the denomination complementing the scene, in a design engraved by Mint engraver Herbert Waehner.

According to the Austrian Mint, Klimt based this painting on a quote by German philosopher Friedrich Schiller, where Schiller suggested that good art should please only a few.

The reverse depicts Judith II (Salome), a painting based on the story of Judith, who seduced Nebuchadnezzar’s general, Holofernes, who was eventually beheaded.

Klimt shows women as the savior of Israelites through this painting, “as Judith used her charms and feminine ways to distract and kill the invading Holofernes,” according to the Austrian Mint.

Klimt muse Adele Bloch Bauer was the model for the painting; the design on the coin was engraved by Helmut Andexlinger.

Each coin is packed in a box with a numbered certificate of authenticity. A wooden collection case for the whole series may be purchased separately.

The final two coins of the series are Hygieia for 2015, from the faculty painting Medicine, and in 2016, The Kiss.