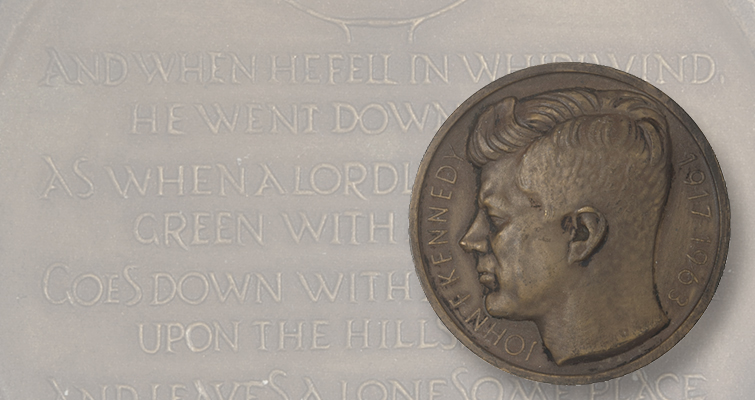 This dark bronze Kennedy medal is the work of Yugoslavian sculptor Emil Bohutinski. The initials EB appear on the truncation of the bust. 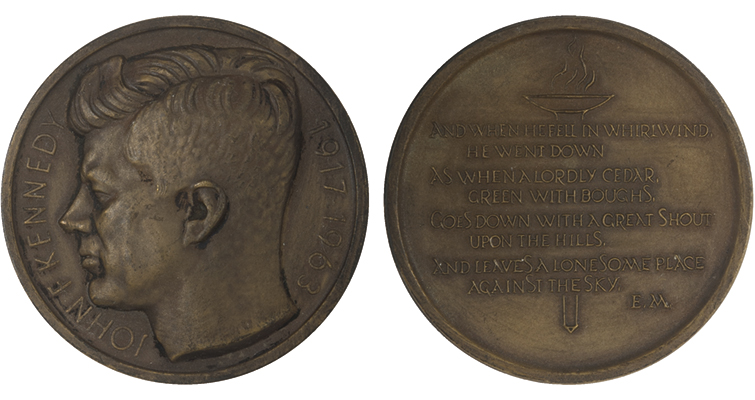 The poetry segment on the reverse of this bronze Kennedy medal was penned by 19th century poet Charles Edwin Anson, ending a poem written in memory of President Abraham Lincoln: "And when he fell in whirlwind, / he went down / As when a lordly cedar, / green with boughs, / Goes down with a great shout / upon the hills, / And leaves a lonesome place / against the sky. E.M." The text is set over an outline of the torch of liberty.

Coin World periodically receives inquiries from readers trying to identify a piece under consideration or already in their collection. The reader often seeks to learn the history behind the piece and its manufacture. The John F. Kennedy medal illustrated is one such medal.

The medal, featuring John F. Kennedy on the obverse and a quotation of poetry on the reverse, measures approximately 54 millimeters in diameter and appears to be struck in bronze.

I had the opportunity to show the medal to medallic art specialist Dick Grinolds from Minnesota Aug. 11 at his table at the American Numismatic Association World’s Fair of Money in Rosemont, Ill.

Grinolds said he had not before seen an example of the medal, which depicts a high relief portrait of Kennedy facing left. Grinolds surmised the medal could possibly be of foreign manufacture. Two details Grinolds noticed were a poorly formed edge, possibly the result of a defective planchet, and the initials EB appearing on the truncation of Kennedy’s bust. And therein lies a clue to the origin of the medal.

On Aug. 13, I searched the eBay auction site and came across an offering of an example of the medal, 59 millimeters in diameter, struck in brass. The same eBay seller, mlajen from Zagreb, Republic of Croatia, once part of Yugoslavia, also offered a 117-millimeter example of the medal in brass.

The medals are identified by the eBay seller as the work of Zagreb sculptor Emil Bohutinski, who executed the medals soon after Kennedy’s Nov. 22, 1963, assassination.

William R. Rice's 2014 reference, The Kennedy World in Medallic Art, the culmination of 48 years of numismatic research, identifies the several variants of the medal illustrated with the following attribution numbers:

The inscription on the reverse of the medal is taken from a poem by American poet Charles Edwin Anson Markham written in memory of President Abraham Lincoln, according to medal specialist David T. Alexander.

The Rev. Frederick Brown Harris, chaplain of the U.S. Senate in 1963, used the words of Markham’s poem as the theme for his prayers when he rushed to Capitol Hill soon after word of Kennedy's assassination spread.