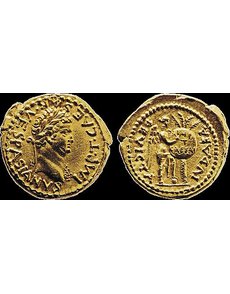 Though victory had not yet been achieved, the Romans were not hesitant to express their plans for domination of the Jews on coinage.

One such coin, a circa A.D. 70 gold aureus of Titus as Caesar featuring the legend IVDAE DEVICTA, or “Judea is conquered,” on the reverse, is just one of many highlights from the Shoshana Collection of Ancient Judaean Coins, to be auctioned beginning March 8 and 9.

During the period in which the Romans fought in the Jewish War, around A.D. 66 to 70, the Romans employed coins as one method of propaganda. The Judea Capta series of coins commemorating the fall of Jerusalem in A.D. 70 after four years of warfare is one of the most widely known from the Roman series, and just one of the areas featured in the first part of the Shoshana Collection, which is being auctioned by Heritage Auctions in New York City. The collection of more than 1,800 coins was built over 40 years by a West Coast collector whose identity remains anonymous.

Coins in a total of 712 lots are offered in the first part of the collection, including “an unparalleled example of this extreme rarity, certainly the finest example known for the type,” according to Heritage.

The undated coin is the only known example with a complete inscription on the shield, according to the firm. Scholars suggest that it was struck early in A.D. 70, before or during the siege of Jerusalem that took place from May to September, meaning the IVDAE DEVICTA legend “would thus seem to anticipate an inevitable Roman victory and complete subjugation of Judaea,” which finally came after Masada fell in 73.

A laureate bust of Titus as Caesar appears on the obverse of the coin, which is believed to have been struck in Judea, or possibly Antioch.

A nick on the cheek is the only detraction “keeping [the coin] from perfection.” Heritage lists the grade as “Lustrous Good” Extremely Fine. The coin has an estimate of $475,000.

Other highlights are detailed in other articles in the March 5 issue of Coin World.

A 19.5 percent buyer’s fee applies to all winning bids.

Judea, Hasmonean Dynasty, John Hyrcanus I, circa 134 to 104 B.C. bronze double prutah, possibly struck at a mint in the Galilee region, “it is suggested that it was not struck at the Jerusalem mint,” 18 millimeters, 3.38 grams, Hendin 1136 (Guide to Biblical Coins, Fifth Edition, by David Hendin), Lot 20082, VF.