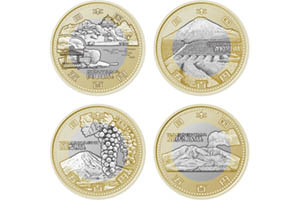 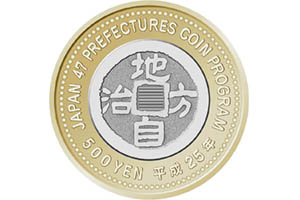 The common obverse to all circulating commemorative 500-yen coins in the 47 Prefecture program shows an unspecified historic Japanese coin.

The coins are the final 2013 ringed-bimetallic issues from the Japan Mint’s multiyear series of coins commemorating each of the nation’s 47 prefectures (like American states).

The circulating ringed-bimetallic 500-yen coins commemorating Okayama, as well as those for the prefectures of Shizuoka, Yamanashi and Kagoshima, are now available. The newest coins available represent the 29th through 32rd issues in the program, respectively.

Each 500-yen coin (with a face value worth about $4.86 U.S.) is composed of 75 percent copper and 12.5 percent each of zinc and nickel. Each weighs 7.1 grams, measures 26.5 millimeters in diameter and has a mintage of about 1.8 million coins per prefecture.

Each obverse carries a distinct design for the respective prefecture.

The common 500-yen reverse shows an unspecified historic Japanese coin, surrounded by English and Japanese inscriptions indicating the name of the program and the denomination.

The obverse of the Okayama coin shows a scene from the famed Okayama Korakuen Garden, which is historically considered as one of the top three such landscape gardens in Japan.

The obverse of the Shizuoka coin carries a familiar scene, Mount Fuji, with a tea plantation in the foreground panorama.

Mount Fuji, perhaps the most famous natural symbol of Japan, also appears on the Yamanashi coin, with clusters of grapes, the local agricultural product, rounding out the scene.

The volcanic Mount Sakurajima graces the obverse of the Kagoshima coin, with a spew of smoke rising from the cauldron.

Proof examples of the 500-yen coins in special packaging have also been issued, at a premium price above face value.