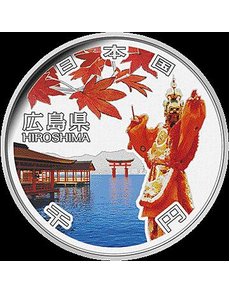 A colorful silver Proof coin for Hiroshima is due to be issued by late July. 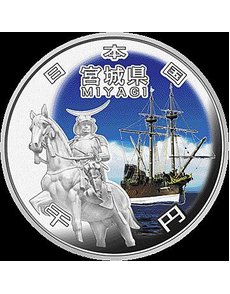 Japan’s first Proof 2013 silver coin from a series celebrating each prefecture, this one honoring Miyagi, was just released.

The Japan Mint has released the first 2013 issue from its multiyear series of coins commemorating each of the nation’s 47 prefectures.

The colorized Proof .999 fine silver 1,000-yen coin celebrating Miyagi, the 26th prefecture honored in the series, is now available; it was released in late May. The second 1,000-yen issue of 2013, honoring Hiroshima, will be available in late July; orders for that coin are being accepted now by American distributors.

The program offers a Proof silver 1,000-yen coin and a companion circulating base metal 500-yen coin for each prefecture (the circulating coins for Miyagi and Hiroshima are not yet available).

The reverse of the colorful 1,000-yen coin, common to all the series’ 1,000-yen coins, shows snow crystals, the moon and cherry blossoms.

A statue of samurai lord Date Masamune, located at the mountain fortress Sendai Castle, appears on the obverse of the silver 1,000-yen coin for Miyagi Prefecture. Masamune was the first lord of the Sendai Domain during the Edo Period (1603 to 1868).

In 1613, Masamune sent a delegation to Spain’s King Philip III and Pope Paul V in Rome, seeking to open trade with Mexico for religious concessions. The trip used the first Japanese-built western-style sailing ship the San Juan Bautista, which is seen on the coin.

Hiroshima is known for its scenic vistas including maple trees, so red maple leaves are one element on the obverse of its 1,000-yen coin.

The ancient music style of Bugaku is referenced in the performer on the coin, with a view of the Itsukushima Shinto Shrine filling the scene. The shrine was founded in 593, and the current building dates to the 12th century, according to the Japan Mint.

The Miyagi silver 1,000-yen coin is available from PandaAmerica for $109 plus $7 shipping. Distributor Euro Collections International offers it for $135 plus shipping and handling. Prices for the Hiroshima coin are expected to be the same as for the Miyagi coin.