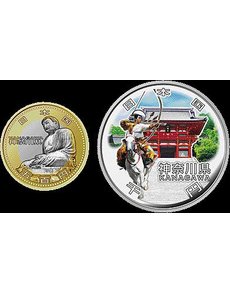 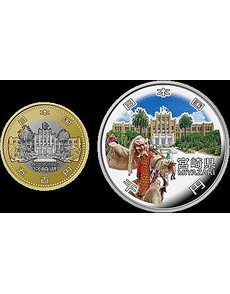 Miyazaki’s local government building is the center of attention on both coins for that prefecture, with the silver 1,000-yen coin also highlighting a dancer performing a customary dance. 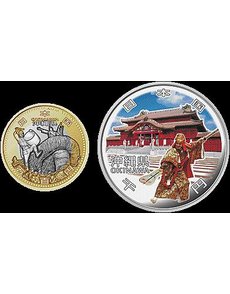 New coins for Okinawa celebrate the annual tug-of-war contest in Naha as well as Shuri Castle, a UNESCO site.

Japan’s program honoring each of the nation’s 47 prefectures continues, with coins commemorating Okinawa, Kanagawa and Miyazaki.

The Kanagawa and Miyazaki silver 1,000-yen coins are due for release “around July,” the same time all three 500-yen circulating coins should become available, according to the Japan Mint.

The multiyear program is honoring Japan’s political subdivisions, with each prefecture celebrated on two different coins.

The coins celebrating Okinawa, Kanagawa and Miyazaki are the 20th, 21st and 22nd coins in the program, respectively.

Local festivals and culture feature prominently in the designs for the coins for Okinawa Prefecture, which is composed of some 50 islands in the west/southwestern part of the country.

The ringed-bimetallic 500-yen coin shows an annual giant tug-of-war that is held in Naha, the prefecture’s capital, every year in October. The modern event dates back more than four decades but historians suggest the event has earlier roots, to the 17th century.

Today, some 25,000 people compete on East and West teams, tugging and pulling for 30 minutes at which point a victor is declared. The 2011 rope measured more than 650 feet, weighed some 90,500 pounds and had a diameter of about 5 feet.

The 500-yen coin also celebrates eisa, a form of folk dance indigenous to the people of the Ryukyu Islands, which includes Okinawa.

During the summer, youngsters in town perform the dance to the beat of drummers to wish for sound health and for the safety of the family and prosperity, and as a memorial service for their ancestors.

Shuri Castle, which was built in the 14th century, once was home to the Ryukyu Kingdom, an independent country. Destroyed in 1945 during World War II, it was restored in 1992 and is on the UNESCO World Heritage Sites list.

Kumiodori, literally meaning combination dance, is a traditional Okinawan form of musical theater (dating to 1719) that is composed of words, music, movements and dances.

A Buddhist statue and the seat of samurai government appear on the coins for Kanagawa, which is a suburban area for Tokyo.

Measuring nearly 44 feet tall and weighing an estimated 270,000 pounds, the Daibutsu (or Great Buddha) appears on the 500-yen coin. The bronze statue of Amitibha Buddha is located at the site of the Kotoku-in Temple in Kamakura.

Cast in 1252, the statue survived a tsunami in 1498 that erased the temple surrounding it, and it remains sitting in the open, with a green patina.

The 1,000-yen coin shows Tsurugaoka Hachimangu Shrine and the ritual of Yabusame (or horseback archery).

Kamakura was a center of samurai government and the Tsurugaoka Hachimangu Shrine was built in the late 12th century to protect the shogunate.

Yabusame is a type of mounted archery where an archer on a galloping horse shoots three arrows at wooden targets. This event at Tsurugaoka Hachimangu Shrine is a ritual ceremony. It dates back to at least A.D. 794.

Local government stars on the designs for the coins from Miyazaki Prefecture, which is located on the island of Kyushu.

The main building of the prefectural government appears on both the 500- and 1,000-yen coins, with the latter also showing a native dance.

The modern Gothic building is symbolic of the architecture in the prefecture, according to the Japan Mint.

The custom of Takachiho Yokagura (sacred nighttime dances) was born from a myth about Amaterasu, the Shinto sun goddess, in which she hid in a cave but was lured out when the laughter of other gods and goddesses (who were laughing at a spirited, ribald dance) drew her out.

The dances are held on Saturdays from November to February, with 33 different segments performed throughout the night.

A sole dancer is depicted with the building on the 1,000-yen coin.

The program, announced in 2008, celebrates each of Japan’s 47 prefectures. Authorized for each prefecture are two pieces: a circulating, base metal, ringed-bimetallic 500-yen coin and a colorized Proof 1-ounce silver version. The program runs through 2016.

Each 500-yen coin (with a face value worth about $6.28 U.S.) is composed of 75 percent copper and 12.5 percent each of zinc and nickel. Each weighs 7.1 grams, measures 26.5 millimeters in diameter and has an estimated mintage of about 1.8 million coins per prefecture.

Two distributors will offer the silver 1,000-yen coins to American collectors as they become available; the Okinawa coin is now available from PandaAmerica for $109 plus $7 shipping, while Euro Collections International prices the coin at $130 plus $10 shipping. The Kanagawa and Miyazaka coins will be offered after they are released. Euro Collections will also offer the 500-yen coins but they are not yet available.