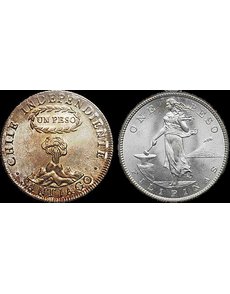 The 1817 Chile 1-peso piece, left, and the 1907 Philippine 1-peso coin, right, are examples of volcanoes on coins that are “explosively interesting.”

Volcanoes, by some accounts, killed the dinosaurs, buried Pompeii and turned sunset skies brilliant colors when Hawaii’s 1883 coins were minted at the San Francisco Mint.

A series of massive eruptions Aug. 26 to 27, 1883, on the Indonesian island of Krakatoa killed tens of thousands of people and launched so much ash into the atmosphere that world temperatures dropped nearly 2 degrees and sunsets blazed bright copper, green, blue and magenta worldwide.

The San Francisco Mint struck dimes, quarter dollars, half dollars and dollars for the Hawaiian kingdom from Nov. 17, 1883, through the following June under those volcanic skies. These coins, designed by Charles E. Barber, show King Kalakaua I.

In 2012, the U.S. Mint struck Hawaii coins once again. These coins, part of the America the Beautiful Quarter program, show Kilauea erupting.

The quarter dollar was released at Hawai`i Volcanoes National Park Aug. 29, 2012 — 129 years and two days after the Krakatoa explosion.

One of the earliest coins to show an exploding volcano is a peso issued by Chile in 1817 to celebrate its independence. This coin shows fire and ash rising from a volcano, a metaphor for the new government.

While the 2012 Hawaii quarter dollar is the first U.S. coin to feature an exploding volcano, United States Mints have been striking volcano coins off and on since 1903.

Between 1903 and 1919, the Philadelphia and San Francisco Mints struck millions of bronze, nickel and silver coins for the Philippines under U.S. sovereignty that show smoke rising from Mount Mayon.

The volcano, on the island of Luzon, is depicted behind a blacksmith on the 1- and 5-centavo coins and behind a walking woman on silver 10-, 20-, and 50-centavo pieces and 1-peso coins.

Oregon’s Mount Hood is depicted on the reverse of the 1925 Fort Vancouver Centennial commemorative half dollar and the 2010 Mount Hood National Forest America the Beautiful quarter dollar.

The 2005 Oregon State quarter dollar shows Crater Lake, a 1,943-foot-deep lake that fills the crater left behind by the eruption of Mount Mazama.

Mount Rainier, an active volcano, appears in the background on the reverse of the 2007 Washington State quarter dollar.

None of the volcano coins are rare. Most of the U.S. coins can most likely be found in pocket change. The Philippine and Chile coins may be found in a world coin dealer’s inventory.

They may not be valuable, but they are explosively interesting.