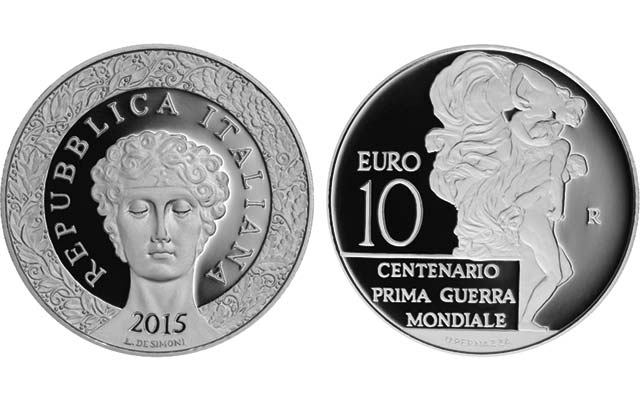 Italy remembers the 100th anniversary of its involvement in World War I with a Proof 2015 silver €10 coin.

Italy has joined the growing number of nations to issue a coin commemorating the centennial of World War I.

The obverse of the coin shows a forward-facing bust representing Italy with a melancholic attitude, her head wrapped with a band adorned with a five-pointed star. The design was inspired by the Vittoria Alata (Winged Victory) sculpture by Cesare Busnelli.

Inscriptions on the obverse include the nation’s name, the year of issue and the designer’s initial and surname, indicating that Luciana De Simoni created the obverse. A garland of olive branches is on the left and a garland of oak branches on the right, symbolizing glory and strength.

The reverse shows the sculptural group Sacrifice created by Leonardo Bistolfi for the monument erected in Rome in honor of Italian President Victor Emmanuel II. The sculpture represents a dying hero, kissed by a feminine figure embodying Liberty and Family, and supported by a man unchained by the hero’s sacrifice.

The face value, initial and surname for designer Uliana Pernazza and a legend translating to “Centennial of the First World War” also appear on the reverse.

The coin weighs 22 grams, measures 34 millimeters in diameter and has a mintage limit of 5,000 pieces. It retails for €60.