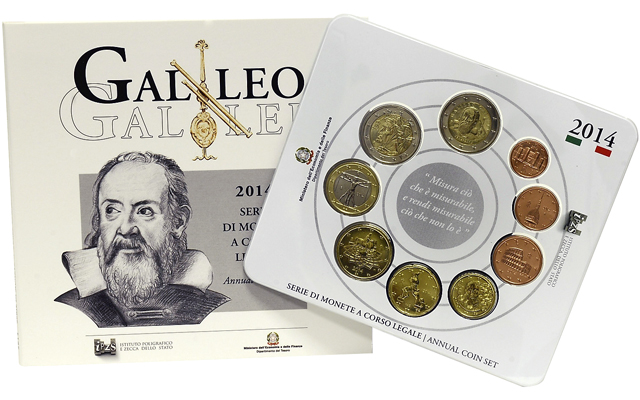 Italy’s mint has issued its annual Brilliant Uncirculated set, which includes BU examples of all eight circulating coins and one of the circulating commemorative 2-euro coins for 2014, honoring astronomer Galileo Galilei. 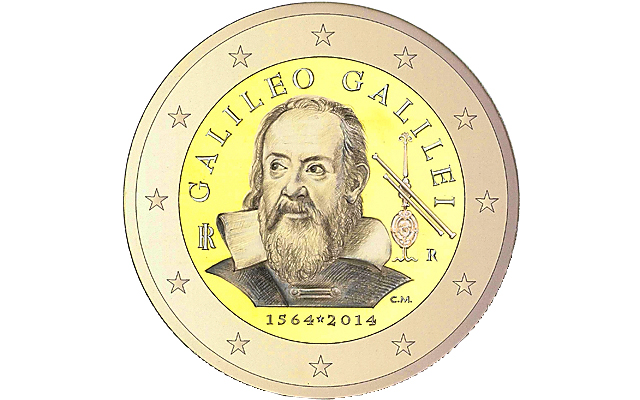 Italy’s second circulating commemorative 2-euro coin for 2014 has a mintage limit of 6.5 million pieces but its release date has not been announced.

Italy’s annual Brilliant Uncirculated set for 2014 is now on sale.

The set, which contains a face value of 5.88 euros in coins, was released June 17, and announced June 19 by Instituto Poligrafico e Zecca dello Stato (Italian Mint).

The set includes BU examples of all eight circulating euro coins, from cent to 2-euro piece, with an additional, circulating commemorative 2-euro coin celebrating the 450th anniversary of the birth of Galileo Galilei.

The Galileo 2-euro coin features the famed astronomer on the national, or obverse, side, based on a 1536 painting by Justus Sustermans that is found in Italy’s Uffizi Gallery in Florence. An astronomic telescope appears to the right of the scientist.

Claudia Momoni designed the obverse of the coin, which will have a mintage of 6.5 million coins. The issue date for the coin in circulation and in other collector versions has not been announced.

The Galileo 2-euro coin is one of the two circulating commemorative 2-euro coins for Italy in 2014. The other coin, marking the 200th Anniversary of the foundation of Arma dei Carabinieri, the military police of Italy, was released in March.

The Brilliant Uncirculated set has an edition of 12,000 sets, and each is housed in a sleeve with a special design honoring Galileo.

Special Uncirculated and Proof sets also including the Galileo 2-euro coin (and a commemorative silver 5-euro coin of unknown theme) are due for release July 18 and Nov. 18, respectively, according to the IPSZ.

U.S. distributor Coin & Currency Institute will offer the Brilliant Uncirculated set for $49.50 plus postage and handling.