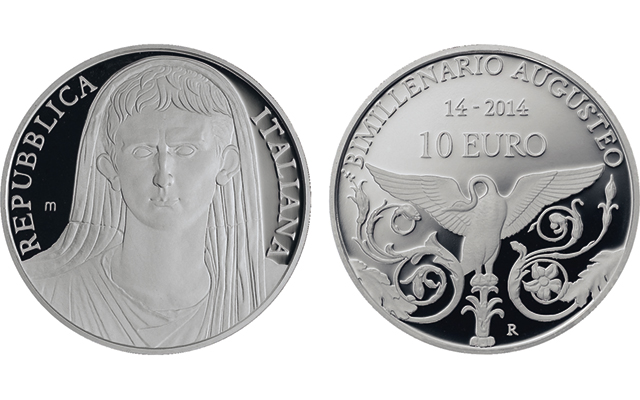 Italy’s newest collector coin celebrates the 2,000th anniversary of the death of the first Roman emperor, known as Augustus.

A new coin released May 7 by the Italian State Mint honors the 2,000th anniversary of the death of one of the most famous Roman emperors, Gaius Julius Caesar Octavianus (who was later proclaimed Augustus in 27 B.C.).

The ruler founded the Roman Empire and, as its first emperor, ruled for the longest period in Roman history.

A new Proof .925 fine silver 10-euro coin shows on the obverse a veiled bust of Augustus from a marble statue in the National Roman Museum, and details from the friezes decorating the Ara Pacis, the Altar of Peace, in Rome, on the reverse.

The coin weighs 22 grams, measures 34 millimeters in diameter and has a mintage limit of 5,000 pieces. It’s official issue price is 60 euros.