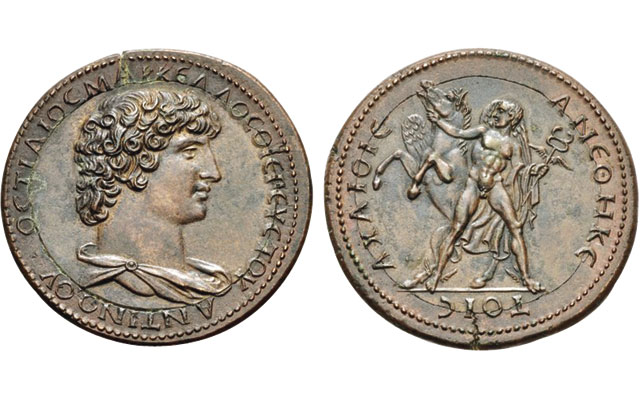 A copper and orichalcum medal struck circa 1550 — meant to imitate an ancient coin of Antinoos — sold for $12,000 in Nomos Ag’s winter-spring fixed price list.

The so-called Paduan piece was the creation of artist Giovanni da Cavino, who lived from 1500 to 1570. The artist was a well-known engraver famous today for his medallic copies of ancient coins, as explored in the December 2014 Coin World Monthly. Cavino was thought to catch the spirit and artistry of Roman coins in ways that were actually “better” than the originals, according to Nomos.

Cavino’s medals were initially issued by striking, but their great popularity soon resulted in casts being made as well. Casts and restrikes from the dies (which were retouched over the years) were made for some 200 years, but originals like this example are especially valued for their artistry.

“This Cavino is a true tour de force of 16th century workmanship,” according to the firm. “Not only are the dies beautifully engraved, but the artist has created a bi-metallic planchet in the style of the great medallions made in Rome during the second century.”

The medal in the Nomos list shows Antinoos on the obverse and Hermes on the reverse.

It has a reddish brown patina and a minor edge crack; the auction house describes it at Good Extremely Fine.