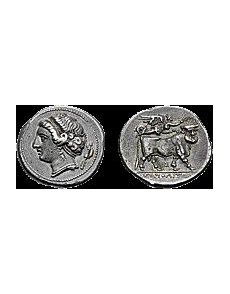 A nymph’s head and a man-headed bull crowned by Nike were the standard designs of the silver didrachms of Neapolis. This example was struck circa 275 to 250 B.C. 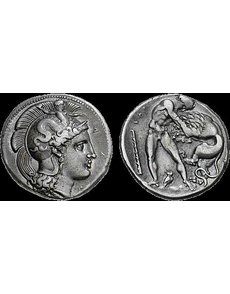 Silver stater of Heraclea, struck circa 340 to 330 B.C., shows the goddess Athena wearing a crested helmet and the hero Heracles wrestling the Nemean lion. 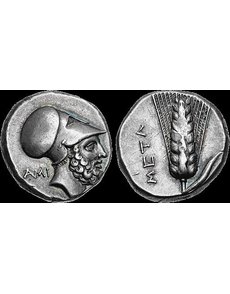 The helmeted head of Leucippus, who was said to have founded Metapontum, appears on the obverse of this stater, circa 340 to 330 B.C. A grain ear appears on the reverse. 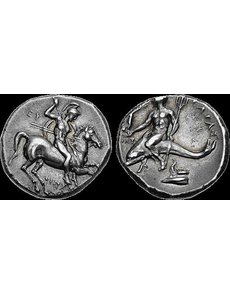 Silver didrachm of Taras, struck circa 280 to 272 B.C., depicts a cavalryman with shield and spears opposite a dolphin-rider who holds Nike.

Some of the most spectacular ancient coins were struck at colonies founded by the Greeks along the southern and western shores of the Italian peninsula.

Several of these mint cities had issued silver coins before the end of the sixth century B.C., and most continued to do so until they fell victim to hostile neighbors or were absorbed into the expanding “empire” of the Romans.

The coinage of this region is so diverse that even the most dedicated and resourceful collectors are unlikely to find all of the prizes they seek. Thus, many collectors decide to specialize by metal, geography, era or historical episode. A popular approach is to collect the large-size silver coins — called staters, didrachms or nomoi — of the fifth through third centuries B.C.

The issues of the most important mints have iconic designs that allow a basic type set to be assembled easily, yet there is so much variety that a lifetime is insufficient to build a comprehensive collection. We’ll focus only on the principal types from the major issuing cities.

Among the most familiar of these silver coins are the didrachms of Neapolis, a Greek colony founded on the shore of the Bay of Naples. They show on their obverse the head of the nymph Parthenope, and on the reverse, the river-god Achelous in the form of a man-headed bull being crowned by Nike. The Neapolitan didrachms were so popular that the type was adopted for silver and bronze coins of nearby cities.

Moving south along the western coast of Italy, we encounter Poseidonia. It had been one of the important issuers of coins in the Archaic period, though it issued staters in comparatively smaller quantities in the Classical period. The obverse of these coins depicts the striding figure of the sea-god Poseidon, and a standing bull appears on the reverse. The design was ideal since Poseidon was the patron deity of the city and the bull was his animal familiar.

Velia is the next major mint in our southward trek. It produced large quantities of silver didrachms in the fifth and fourth centuries B.C. showing on the obverse the head of the goddess Athena wearing a crested and decorated helmet, and on the reverse, a lion. The lion is depicted variously as standing, prowling, gnawing on an animal bone or bringing down a deer. The variety in this series is great enough to be a formidable collecting challenge.

Still further south is Terina, which issued comparatively little coinage. The city is beloved by ancient coin specialists, though, because the level of artistry on its coinage was high. Typically, the obverses of its staters show the portrait of the city nymph and the reverses show Nike either seated or standing. However well the dies were engraved, the striking quality was not always ideal, making it hard to find a well-struck piece.

Upon reaching the tip of the toe of Italy, we encounter Rhegium, the largest city that was located across the narrow strait separating Italy and Sicily. Rhegium issued few coins of stater size, preferring tetradrachms as its high-value denomination since they were popular in Sicily. Indeed, the only staters issued at this city show the winged horse Pegasus and the helmeted head of Athena — a design borrowed from the staters of Corinth in central Greece, since they were popular with mercenaries.

Corinthian-type staters were also issued at Locri Epizephyrii, a city on the southern shore of Italy, not far from the toe. The Locrians also produced staters showing the head of Zeus on the obverse and his eagle on the reverse; the style of these coins is distinctive.

East of Locri was the city of Caulonia, which produced remarkable coins in the Archaic period and a substantial number of staters in the subsequent era. These later coins have on the obverse a striding Apollo before a small stag, and on the reverse a larger standing stag. Their style ranges from impressive to barbaric, and it is difficult to explain why so many of the latter were issued.

At the western edge of the Italian boot instep was the city of Croton. The earliest staters of the Classical period show the tripod of Apollo on both sides of the coin, or combine a tripod with a flying eagle. Those issues were followed by types showing, in various combinations, the heads of the gods Apollo and Hera, a tripod, the infant Heracles wrestling serpents, a mature Heracles reclining, and a standing eagle.

The city of Thurium, located in the instep of the boot, was founded in 446 B.C. by Athenians and refugees from Sybaris, the city that had formerly occupied the site. Its Classical period staters show on the obverse the helmeted head of Athena, and on the reverse, a bull. The style evolves over time, and on some late issues Athena is displaced by Apollo.

The city of Heraclea, located a little further east in the Italian instep, was founded by neighboring Greeks in 433/2 B.C. Its staters show on the obverse the helmeted head of Athena (usually in profile, but sometimes facing), and the reverse depicts the hero Heracles holding his accoutrements, being crowned by Victory, crowning himself, conducting a sacrifice at an altar or wrestling the Nemean lion. There is much variety in the Heraclean coinage.

Not far to the east of Heraclea was Metapontum, which issued great numbers of staters in the Classical period. The standard reverse type for its staters is a highly detailed grain ear — a carryover from the city’s Archaic period coinage. It was paired with several obverse types, usually the heads of the goddess Demeter or the city founder Leucippus, though Nike, Heracles, Dionysus and Zeus are also portrayed.

The last city in our coastal survey is Taras (Tarentum to the Romans), also located within the heel of Italy. The usual obverse type of its didrachms in the Classical period is a horse and rider, and the reverse depicts a boy riding a dolphin. The identity of the dolphin rider is still debated: he may be the legendary founder Taras or Phalanthus, the son of Poseidon. The variety within this series is astonishing, making it one of the most popular specialties of all ancient Greek coinage. ¦