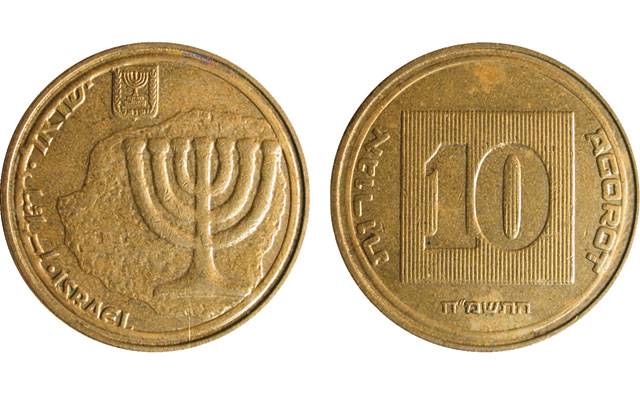 This 1985 Israel 10-agora coin shows a well-developed ring on each face. It is similar to rings found on other world coins.

All images by Mike Diamond. 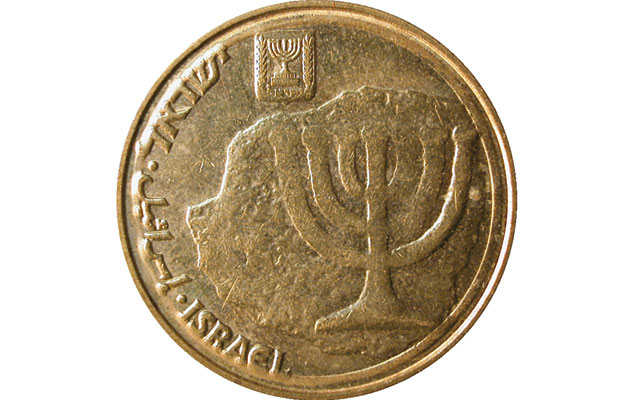 The obverse ring of a second Israel 1985 10-agora coin weakens and breaks up on the left side.

All images by Mike Diamond. 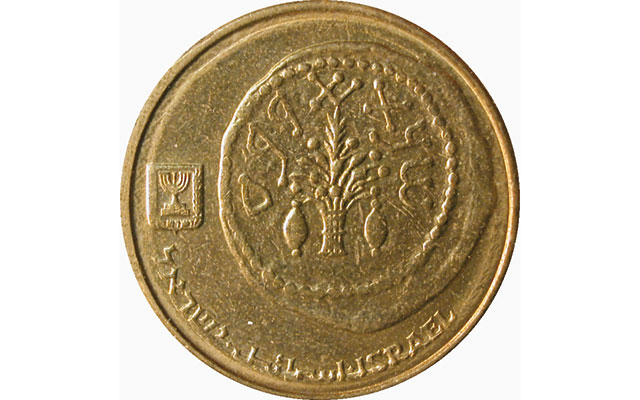 Both rings on this 1985 5-agora coin taper and fade out on the right and left sides (obverse ring shown). 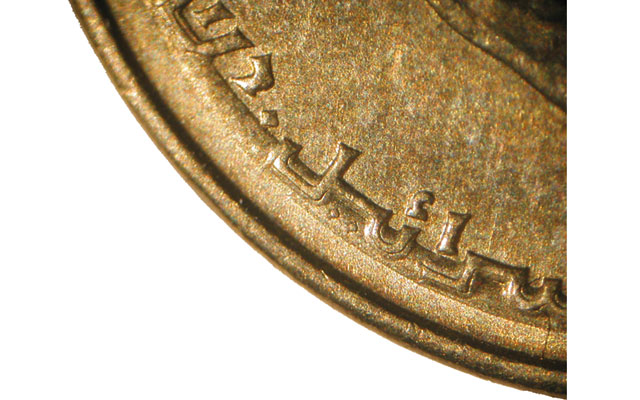 Letters arranged along the southern arc of the 5-agora coin’s obverse face are nearly swallowed up by the ring. Letter outlines persist within the ring. 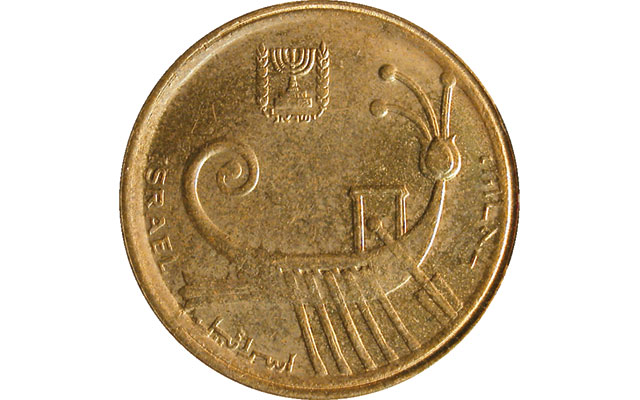 The ring on the left side of this 1985 Israel 1-agora coin has merged with the design rim. 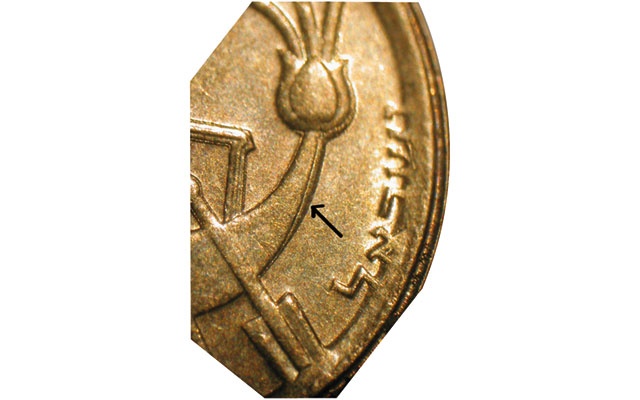 A second 1985 1-agora coin shows clear evidence of die deterioration in the form of swellings that flank the prow of the ancient galley (black arrow).

In the Feb. 17 column, I reported on world coins with raised rings found just inside the design rim. At the time of writing, these rings seemed to be rare and were known only from Italy, Thailand, and Ireland. They have now been found among coins struck by Israel.

In my report, I was impressed by how different these rings looked from domestic “ridge rings,” which occur mostly in copper-plated zinc cents. The domestic rings are very common and are clearly a manifestation of die deterioration. They are usually incomplete, vary in width and height along their course, often appear on only one face, and typically have soft margins. The domestic rings vary from wide to narrow.

By contrast, the rings found in foreign issues are typically complete, sharply defined, narrow, uniform in width and height, and present on both faces. A 1985 Israel 10-agora coin shows this classic form of ring development. As with most examples, the coin doesn’t show any obvious signs of die deterioration.

Hampered by small samples, I wrestled with various explanations that ranged from a hubbing mishap, excessive heat generated while machining the die neck, or some kind of die deformation error that developed during use.

Now a larger sample of Israeli coins has revealed unexpected variability that serves to bridge the gap between the sloppy-looking domestic ridge rings and the elegant rings seen in foreign issues.

A second 1985 10-agora coin, this one struck by different dies, demonstrates this variability in the form of a weaker, less uniform pair of rings. The obverse ring narrows, becomes lumpy, and nearly fades out on the left side. The reverse ring (not shown) narrows and fades out on the right.

Similar variability is seen in a 1985 5-agora coin. On each face the ring tapers and fades out on the right and left sides. Peripheral letters are nearly swallowed up by the ring along the southern arc of the obverse face. Ingestion of the letters is not complete as thin outlines of those letters persist along the top of the ring. It’s worth noting that the ridge rings of domestic cents can swallow up letters in the same fashion.

A different pattern of variability is seen in a 1985 1-agora coin, where the obverse ring merges with the design rim on the left side. A similar but less complete merger of ring and rim appears in a second 1985 1-agora coin (not shown). Unlike the previous four coins, the latter coin shows clear signs of die deterioration on the ancient galley, especially its prow. Affected elements are flanked by swellings neatly set off by narrow grooves.

Since all of the affected Israeli coins carry the same date (1985), it suggests a pervasive problem with the die steel. In September of that year the Israeli sheqel was devalued and a new series issued (the “new sheqel”). Perhaps in its rush to produce them, the mint failed to pay sufficient attention to the quality of the die steel or the manner in which it was treated.

Since the rings usually develop on dies that show no other signs of die deterioration, it’s safe to conclude that this is no ordinary expression of die wear. Premature, exaggerated, and localized die deformation can be classified as either a soft die error (if it’s shallow and affects a broad area) or a die subsidence error (if it extends deep into the die face). Since these rings clearly represent a significant sinking-in of the die face, I would be comfortable classifying them as encircling die subsidence errors.