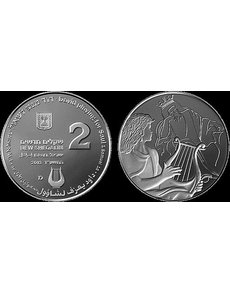 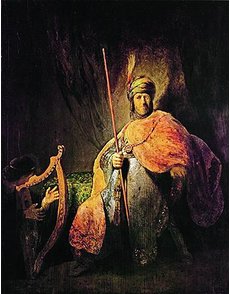 Images courtesy of www.wikipedia.org.Famed Dutch artist Rembrandt van Rijn is just one painter to depict the Bible story appearing on the coins.
Previous
Next

The biblical story of David playing the harp for King Saul is the subject of the Bank of Israel’s 18th coin in the Biblical Art series.

Saul’s imminent disappearance as king is represented by an outlined image of the dejected, crowned Saul seated on the throne. In the foreground, David, the young shepherd whose anointing as future king was not yet known to Saul, is depicted playing the harp to ease the king’s depressed spirit.

The obverse, designed by Gideon Keich, shows the face value and Israel state emblem, and a decoration representing David’s harp.

The coins are available individually or as part of sets.

The Israel Coin and Medals Corp. (which sells the coins for the Bank of Israel) offers discounted prices for customers who subscribe to its marketing announcements.