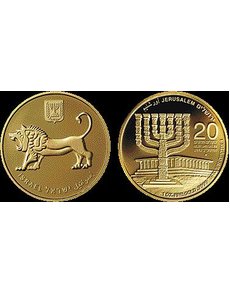 Israel’s third annual 20-new-Israeli-sheqel gold bullion coin celebrates the Menorah at the Knesset, the legislative body for the State of Israel, in a design by Ruben Nutels. Meir Eshel’s standard image of the Lion of Megiddo appears on the obverse.

The Bank of Israel has released its third annual 20-new-Israeli-sheqel .9999 fine gold bullion coin in the Jerusalem of Gold series.

The 2012 coin, released May 20 to mark Jerusalem Day, features the Knesset Menorah, the seven-branched candelabrum that is on display at the Israeli parliament.

The Knesset Menorah is a unique bronze candelabrum that bears reliefs depicting the turbulent history of Israel — the struggles of Israel’s people from exile to rebirth.

The menorah was built by Benno Elkan, a British Jewish sculptor of German origin, over six years.

The menorah, which is 4.3 meters high (about 14 feet), was given to the state of Israel in 1956 by the British Parliament. It is located in the Rose Garden across from the Knesset in Jerusalem.

During the Hasmonean period (the second and first centuries B.C.), the seven-branched menorah became a national symbol for the first time and with the establishment of the modern state of Israel, it was chosen to symbolize the continuity and perpetuity of the Jewish people.

The Knesset Menorah is the major motif in the design of the coin’s reverse, created by Ruben Nutels. Also appearing are the Knesset building and legends indicating the face value, year of issue, gold content and weight (and the nation’s name in three languages — Hebrew, English and Arabic).

The reverse changes every year, while the obverse is anchored by a Meir Eshel design of the famous “Lion of Megiddo” taken from an ancient eighth century B.C. seal, excavated in Megiddo (Armageddon) in the Jordan Valley. The roaring lion figure appeared on an ancient Israelite seal dating to the eighth century B.C. that was excavated at Megiddo in 1908. The seal belonged to Shema, a servant of King Jeroboam II, who was King of Israel during the time of the Prophet Amos. The lion is also the symbol of the Tribe of Judah and of Jerusalem.

Above the lion is the national emblem and below it is the word Israel in the same three languages used on the reverse side.

Tidhar Dagan modeled the designs. The gold coins were struck at the Mint of Finland.

The bullion coin weighs 31.1 grams and measures 32 millimeters in diameter.

Unlike many other bullion coins, the Israeli Jerusalem of Gold coins have a specific mintage limit (3,600 pieces).

The gold bullion coin is available at a price that is established daily, based on the price of gold plus a 20 percent premium (and value-added tax where applicable). The seller, Israel Coins and Medals Corp., sets the price daily at 9 a.m. Israel time based on the previous day’s PM London fix in U.S. dollars.

At press time the coin was available for $1,997 with payment by credit card, with a discounted price of $1,939 for payment via bank transfer.

Current pricing and more information on all Israeli coin and medal issues are available online at www.israelmint.com and www.holylandmint.co.il. Alternatively, to order by phone in the United States, call the toll-free number 888-421-1866. Email the seller at medals@coins.co.il or write Israel Coins and Medals Corp., ICMC/The Holy Land Mint, P.O. Box 2040, Nesher 36680, Israel. ¦