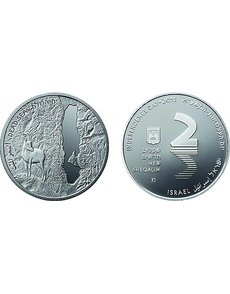 The anniversary release continues a tradition that began in 1958 with the release of a 5-lira silver coin celebrating the nation’s 10th anniversary of statehood.

The themes for the annual issue have varied widely and have touched nearly every segment of Israeli life and culture.

The 2011 subject is a singular and ancient world landmark — the Dead Sea — having a combination of unique geological and geographical conditions that render it a natural phenomenon.

With its surface meeting the world’s lowest dry land, at 420 meters (1,378 feet) below sea level in the Jordan Rift Valley, the Dead Sea is in the center of a region rich in biblical history and archeology. The deepest hypersaline lake in the world, the Dead Sea is also known for having a wealth of minerals, especially potash and bromine.

The Dead Sea, surrounded by weathered salt cliffs, is known for its therapeutic and healing properties, attracting thousands of people who come for treatment. Its high density waters make it hard to swim in but easy to float on.

Evaporation and human activity threaten the Dead Sea, according to Israel Mint, stressing the sea’s ability to be replenished. The southern part of the Dead Sea has already dried up and become an area of salt deposits.

The costly Dead Sea Project is an effort to bring water from the Red Sea to the Dead Sea, planned jointly by the Israelis, Jordanians and Palestinians, producing energy, fresh water and further development of tourism.

“In recognition of these and other efforts, the coin is more than just a metallic tribute,” according to the Israel Mint (also known as Israel Coin and Medals Corp.). “It is dedicated not only to the Dead Sea but also to the importance of preserving this wonder of nature for the future.”

Meir Eshel designed the coin. The obverse is based on a satellite photograph of the Dead Sea region. To the left is a native ibex (wild goat), once an endangered species but that today flourishes on the nearby cliffs.

The reverse shows the denomination and a bilingual (English and Hebrew) legend of independence day 2011. The denomination numeral has a mirrored reflection, as if seen across the glassy surface of water.

The prooflike .925 fine silver 1-sheqel coin weighs 14.4 grams, measures 30 millimeters in diameter and has a mintage limit of 1,800 coins.

Pricing for the coins was unavailable at press time May 13 “because of the current highly volatile precious metal markets,” according to the Israel Mint. Obtain issue prices through the Israel Mint’s website, www.israelmint.com, or telephone the mint toll free at (888) 421-1866.

Packaging for the gold coin and the three-coin set contains salt from the Dead Sea within the lid.

Insured international shipping and handling require an additional $25 per order.