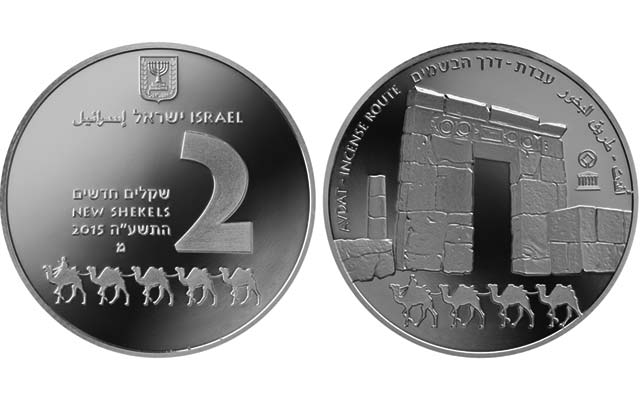 Israel’s newest issue in a commemorative coin series honoring the nation’s UNESCO World Heritage Sites celebrates Avdat, an important city on the ancient incense trade route. A Proof silver 2-new-Israeli-shekel is one of three coins in the program. 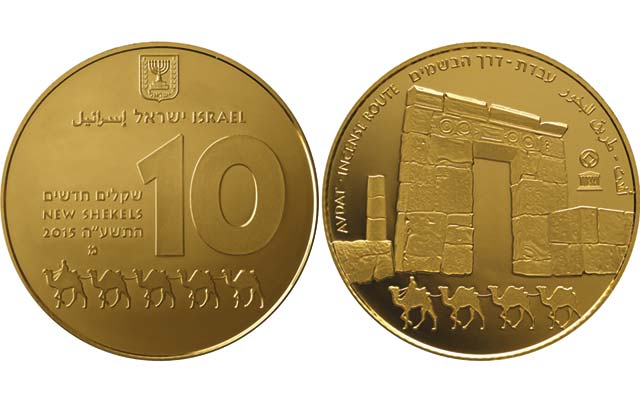 A Proof gold 10-new-Israeli-shekel coin is part of the UNESCO World Heritage Sites coin program, which in 2015 honors Avdat.

One of Israel’s newest UNESCO World Heritage Sites is the latest subject of a coin series from the Bank of Israel.

Avdat is a site of a ruined Nabataean city in the Negev desert in southern Israel. It was the most important city on the Incense Route after Petra between the 1st century B.C. and the 7th century A.D.

From the 3rd century B.C. until the 2nd century A.D., the spice trade flourished. Costly incense, perfumes and spices were brought out of Arabia, across the Negev and to the Mediterranean ports. Nabataean travelers led their camel caravans along this 2,000 kilometer Incense Route, and Avdat was one of four Nabataean cities situated along the route through the Negev Desert.  At the convergence of the ancient routes from Petra and Eilat and the route's continuation to the Mediterranean coast, Avdat was of great importance in the Nabatean spice trade.

Avdat is thought to be named after the Nabataean King Oboda (30 B.C. to 9 B.C.), who was buried there. The city prospered during the reign of the Nabataean King Aretas IV (9 B.C.to A.D. 40), when its acropolis was fortified and a large temple built within it.

When the Roman empire took over the region in A.D. 106 and annexed the Nabataean kingdom, Avdat, devoid of its caravan trade, fell into decline. The Nabataeans turned to farming and succeeded in developing sophisticated systems of water collection and agriculture in the desert.

Avdat was destroyed by the earthquake of 363. Under Byzantine rule in the sixth century, it flourished once again and reached its height. The city was finally abandoned in the seventh century following another earthquake in the year 630.

Excavations were carried out between 1958 and 2000 and Avdat was recognized by UNESCO as a World Heritage Site in 2005.

The obverse carries the face value, “Israel” in Hebrew and Arabic as well as English, the year of issue, the Israel state emblem and  a train of five camels

The reverse features the legend, ADVAT - INCENSE ROUTE in English, as well as its formations in Hebrew and Arabic, and small UNESCO and World Heritage Site emblems. The main design element is the restored gateway of the Nabatean temple, with dedicatory inscriptions engraved on the lintel across the top and a cravan of four camels passing before it.

The Prooflike coin weighs 14.4 grams, measures 30 millimeters in diameter and has a mintage limit of 1,800 pieces. It retails for $49.

All prices are in U.S. funds.

To order the coins, visit the Israel Mint website.