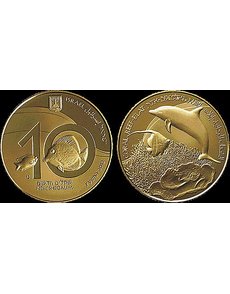 Israel’s newest coins celebrate the Coral Reef in Eilat. The gold 10-new-Israeli-sheqel piece is one of three coins honoring the natural site.

Israel is a relatively small nation, but it has many natural sites and habitats.

Some of those places are now being honored in a series of coins from the Bank of Israel.

Beginning the series are coins, issued in three denominations and two compositions, to celebrate the coral reef in the Gulf of Eilat.

Eilat’s coral reefs provide a habitat for thousands of species and are said to be among the most beautiful in the world, according to the Bank of Israel.

Their unique features result from a combination of factors including the structure of the Gulf of Eilat, its geological history, and climatic and oceanographic characteristics. Together, these factors have led to the development of rich and diverse coral reefs, resembling underwater gardens. Hundreds of coral species, as well as thousands of different species of fishes and marine invertebrates, decorate the reef, creating an array of colors and a marine ecosystem unparalleled anywhere else on Earth, according to the bank.

Artist Galia Erez created all of the designs for the coins, which present the natural splendor of the coral reef with its corals, fishes and water life.

The obverse designs (distinct for each denomination) each show a pair of fish, adjacent to the numerical figures representing the face value in the center, with a wave-shaped design filling the background. The obverse of each coin also contains the Israel state emblem, “Israel” in English, Hebrew and Arabic, the Mint year (2012) and Mint mark.

The standard reverse used for all three denominations shows coral, a dolphin and a fish against a background wave design representing the coral reef. The border inscription reads “Coral Reef — Eilat” in English, Hebrew and Arabic.

The coins are available individually, or in either a set of all three coins or a set containing only the two silver pieces.

Special pricing is available to collectors who register online with the Israel Coins and Medals Corp. to receive notice of new coins. For registered customers, the Prooflike coin is priced at $58, the Proof silver coin costs $98 and a two-coin set costs $148. The gold coin is priced at $1,367 and a three-coin set costs $1,508 under this alternative pricing structure.