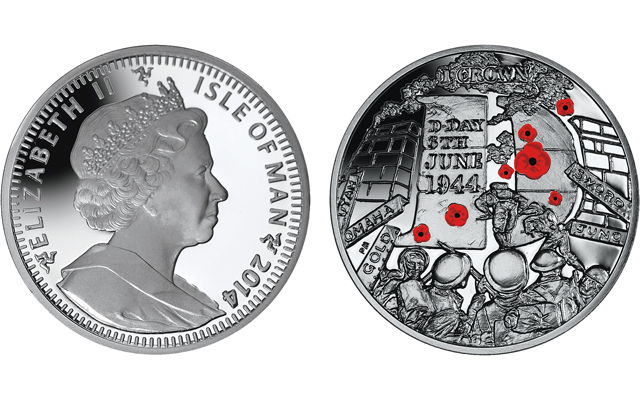 A new coin from the Isle of Man commemorates the military operation referred to as D-Day, the June 6, 1944, Allied attack on German-occupied Europe that turned the war. The colorful Proof crown appears here.

The Allied invasion of German-occupied Europe on June 6, 1944, was the turning point of World War II.

The Pobjoy Mint revealed May 12 that is was issuing a new Isle of Man crown coin, in four versions, to commemorate that momentous event.

Operation Overlord was one of the greatest operations of World War II and was built on the efforts of some 12,000 Allied planes sweeping the skis and naval forces patrolling the English Channel.

On D-Day, amphibious craft landed more than 130,000 troops on five beaches along the Normandy coast. British and Canadian forces landed on Gold, Juno and Sword Beaches while American troops landed on Utah and Omaha Beaches.

The new crown coin commemorates the effort to secure Europe against Nazi tyranny. A stylized design depicts Allied Troops storming a bunker on D-Day with signs naming the five landing beaches, with a large "D" to represent D-Day. Also shown are several poppies, the symbol for those who gave their lives in the effort.

The design is available in either Uncirculated copper-nickel or Proof .925 fine silver versions, both of which are available plain or with the poppies colored red.

For more information or to order the coins, visit the Pobjoy Mint's website or telephone the business at 877-476-2569.