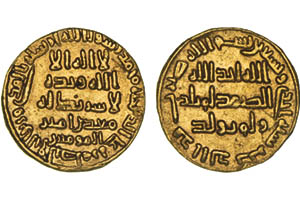 Umayyad gold dinars from the “Mine of the Commander of the Faithful” remain among the most coveted, intriguing and historically significant of all Islamic gold coins, according to specialist Stephen Lloyd.

Lloyd works at London auction firm Morton & Eden, which on April 10 is offering another example of the rarity, a gold dinar from 91h (A.D. 710 to 711). The firm has sold three other examples of the raririties, from different years, since 2011.

The piece in the April 10 auction was issued during the reign of the Umayyad caliph al-Walid I.

The standard design includes text from the Qu’ran but, notably different is the addition of two additional lines that read "Ma’din Amir al-Mu’minin," meaning “Mine of the Commander of the Faithful”. This inscription is generally accepted to indicate that the coin was struck from gold from a mine belonging to the caliph himself.

Lloyd said that experts can deduce that the coins were only ever struck in very small quantities because the same special obverse die, which carries the "Mine of the Commander of the Faithful” legend, was used for at least four years.

The site of the Mine of the Commander of the Faithful has been identified as Ma`din Bani Sulaim, located north-west of the Holy City of Mecca, a site that is still worked today.

Though the origin of the gold used to strike the coins is certain, the location where the coins were minted is less clear.

The auction house notes that the coins may have been struck at a travelling mint that accompanied the caliph. Since the reverse die bearing the date was also used in Damascus at some point that year, “it cannot have been in use at a location away from the capital for more than a few months at most,” according to the lot description.

Scholars have suggested some connection between these coins and the Hajj pilgrimage.

“The [coins] remain some of the most hotly-debated and historically significant of all early Islamic coins, and we are delighted to be able to offer such an exceptional piece in our April sale,” Lloyd said.

The April 10 sale will also include a unique early Umayyad silver dirham from the unrecorded mint of Tukharistan, as well as Abbasid gold dinars and Fatimid coins from Palestinian mints.