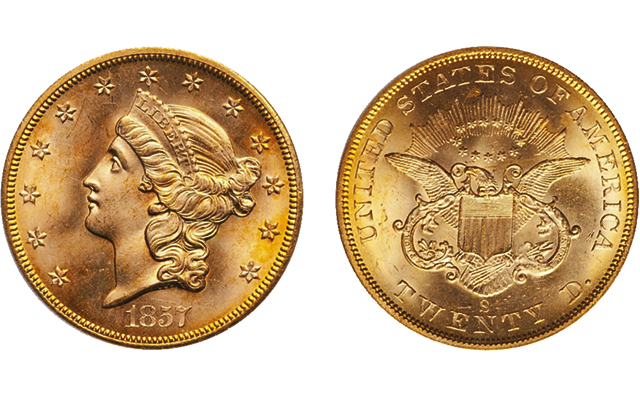 More than 5,200 1857-S Coronet $20 double eagles were recovered from the SS Central America and one of the finest, graded PCGS MS-67 with Certified Acceptance Corp. sticker brought $138,000 at a Jan. 5, 2012, Heritage auction. It is the “Spiked Shield” reverse variety, one of eight reverse dies recognized at PCGS. This one still has the original gold PCGS label.

In a 2000 interview with Robert Evans, an Ohio geologist who helped lead the recovery efforts of the Columbus-America Discovery Group, Coin World news editor William T. Gibbs demystified the process of removing decades of encrusted rust and limestone from gold. Gibbs wrote, “To Evans, the process is a means of uncovering the true beauty of the coins, hidden not by a discoloration or toning of the coins themselves, but by physical incrustations generated by several biological processes.” Evans hoped that by sharing the conservation process, collectors and the hobby would have a better understanding of what was being done to protect the original surfaces of the coins.

To help put into perspective the conservation necessary to make the coins legible, consider that among the artifacts recovered was a tower of 300 gold double eagle pieces that had been cemented together over time by a glaze of sea salts and rust. Evans described it as “a miniature, golden, organic architecture resisting the constant push of gentle sea floor currents.”

The deposits were a natural result of the circumstances that accompanied the coins on the ocean’s floor. The rust came from the ship’s iron engine and boilers, the deposits on the coins came from iron-fixing bacteria in the surrounding water, and the limestone was composed from the shells of dead plankton on the seabed.

The process to clean the coins was based on chemistry: breaking down the rust while causing no chemical reaction in the gold. For example, once the surface incrustations were removed, some coins revealed 140-year-old fingerprints on them. The proprietary process removed the gunk, while leaving the original surfaces intact. But that’s not to say that the process was without its drawbacks. In describing the process and the proprietary blend of chemicals used, Gibbs wrote, “The first thing you notice is the stink — the smell of rotten eggs.”

Nasty odors aside, the conservation process proved effective and many of the coins received high Mint State grades. The coins effectively rewrote population reports and changed numismatics’ understanding of the rarity of many gold issues of the 1850s.

That the coins have been traded openly in the marketplace on par with their non-SS Central America counterparts (and in many cases at a premium) is a testament to the effectiveness of the restoration process. That these coins are widely accepted today is a reflection of the careful effort that went into curating, or cleaning, the coins (depending on one’s perspective).

The conservation of shipwreck coins is not without controversy. On one hand, conservation protects the coins from further environmental changes that would undoubtedly take place if rust and limestone were left on the coins. Alternately, the line between thoughtful conservation and inappropriate cleaning is often very thin and historically has shifted.

Among the most elegant responses to the conservation debate came from Rick Montgomery, then-president of Professional Coin Grading Service, the firm entrusted to grade and encapsulate the coins. He wrote in a July 26, 1999, Guest Commentary in Coin World to highlight differences between actual cleaning and the delicate and accepted practice of restoring an object to a more acceptable state of preservation.

He wrote: “Restoration is possible to be performed, not only on artwork, but with coins as well. With just as much care that has been exacted toward the restoration of some of the world’s most prized artwork, so too can coins be restored and preserved for future generations.”

Montgomery followed up the next year with another Guest Commentary that discussed the subject of cleaning in the context of the SS Central America treasure. He wrote that during the restoration of the coins, “The integrity of the coin’s surfaces were left intact, with only the oceanic debris being removed. The original surfaces were then unveiled, revealing the intact Mint luster and miscellaneous contact that subsequently determined the grade of each coin.” He concluded that the term “cleaning” should not be applied to coins recovered from the SS Central America.

Many Coin World readers challenged this perspective, including Bud Zimmerman of Lake Helen, Fla., who wrote in a May 22, 2000, letter to the editor that to collectors, “cleaning” has never been an acceptable practice, and challenging those marketing the coins, adding, “Don’t give us the reason they graded Mint State is because of historical value either. They were cleaned and that’s a fact!”