Ireland commemorates anniversary of Battle of Clontarf on coin 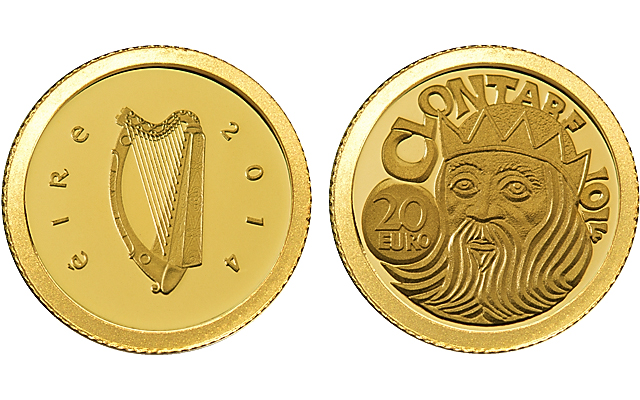 A new gold €20 commemorative coin from Ireland marks the millennium anniversary of the Battle of Clontarf.

The Proof .999 fine gold €20 coin honors the Battle of Clontarf, which was fought on April 23 (Good Friday) in 1014 and is one of the great battles in Irish history. The coin was released May 1.

Often portrayed as a major battle between the Viking invaders and the Irish, it was a much more complex struggle for the High Kingship of Ireland, with Irish and Vikings fighting on both sides.

It ended in victory for the Irish King Brian Ború, who had united Ireland unlike any other.

According to legend, as the victorious King Brian knelt praying in his tent, the Viking Brodir ran into the king’s tent slaying the king with his axe. Ború’s death left Ireland in political stalemate.

The Vikings returned under a different guise the following century with the Norman Invasion, which was the beginning of the English occupation of Ireland.

The half-gram coin measures 11 millimeters in diameter and has a mintage of 12,000 pieces.

Ború appears on the reverse of the coin, with the Irish harp and date on the obverse.

The Central Bank of Ireland sells the coins for €48.