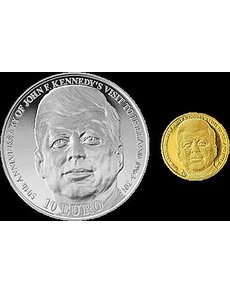 President John F. Kennedy is honored on two new coins from Ireland, celebrating his visit to the nation 50 years ago.

President John F. Kennedy’s trip to Ireland 50 years ago is now being commemorated on coins.

The Central Bank of Ireland will release a two-coin set on June 26 — anniversary of the presidential visit to County Wexford, from which the Kennedy family hailed—commemorating the four-day visit.

The reverses of both the Proof .925 fine silver €10 coin and Proof .999 fine gold €20 coin feature a facing portrait of the American president, surrounded by 50th anniversary of John F. Kennedy’s visit to Ireland 1963-2013. The denomination appears below Kennedy’s portrait. Artist Tom Fitzgerald created the design.

The obverse of each coin depicts the Irish harp, the 2013 date and the national name in Irish, EIRE.

Air Force One landed in Dublin on June 26, 1963, and President Kennedy visited County Wexford the next day, including the family home and the port where his great-grandfather boarded a ship bound for the United States during the 1848 famine. President Kennedy received the “Freedom of the City” honor from Galway on June 29, and also spoke before the Irish Parliament during the trip.

The event left a lasting impression on the Irish nation (Kennedy was famously Irish Catholic).

The silver coin weighs 28.28 grams and measures 38.61 millimeters in diameter. The diameter of the 1-gram gold coin was unavailable from the distributor.

Both coins are available only as part of a set. Distributor Royal Scandinavian Mint is accepting pre-orders for the set for $215 U.S., with delivery expected in mid-July. Shipping and handling are additional.