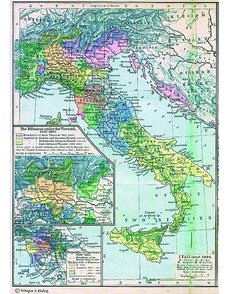 A map shows what Italy looked like in 1494, as city-states ruled various regions. The House of Sforza controlled Milan (arrow), located toward the top of the boot-shaped country.Image courtesy of the Perry-Casteneda Library Map Collection — University of Texas at Austin. 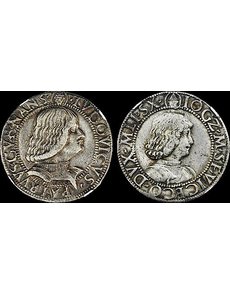 Circa 1481 to 1494 silver testone from Milan depicts the sixth Duke of Milan Giovanni Galeazzo Maria Sforza, on the reverse, right, and his uncle, Ludovico, who is believed to have poisoned him (after assassinating Giovanni’s father in 1476), on the obverse. 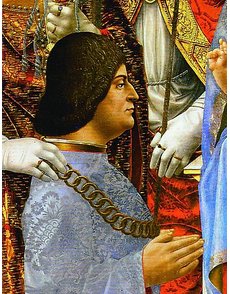 Ludovico Sforza became the Duke of Milan after the curious death of his nephew in 1494, but his comeuppance came a few years later after he ignited the Italian Wars.

These characteristics of the period invite a visit from Hollywood or small screen movie-makers, and they have responded. For example, the now-canceled cable television series The Borgias mythologized the real-life House of Borgia, which found itself at the center the battle for supremacy among Italian city-states in the 15th century.

It is impossible not to think of those tumultuous times when seeing the coins of the Italian Renaissance being offered by Stack’s Bowers and Ponterio in its American Numismatic Association World’s Fair of Money auction in August in Rosemont, Ill.

The signature coin of the time may well be the silver testone, first issued by the House of Sforza, some of whose members turn up in the storyline for the hit dramatic series (spoiler alert: the story involves an arranged marriage between both houses).

One such testone, undated but issued circa 1481 to 1494 in Milan, is a highlight of the latest offering from what Stack’s Bowers is calling the Demarete Collection.

Giovanni was the sixth Duke of Milan, son of the assassinated Galeazzo Maria Sforza whose death in 1476 is widely believed to have come at the poisonous hands of his brother Ludovico. Ludovico, uncle to Giovanni (also known as Gian), then served as regent when the youngster, only 7 years old, was elevated to duke upon his father’s death.

The younger Sforza’s death in 1494 (also under suspicions of poisoning) paved the way for Ludovico to formally seize power. His comeuppance came a few years later when the plotting and scheming ignited the Italian Wars. In 1500, opponents seized and imprisoned him; he died in 1508.

In addition to his political machinations, Ludovico is most famously remembered today as a patron of Leonardo da Vinci, having commissioned The Last Supper.

The testones (or testons — the coin takes its name from testa, meaning head) of Milan are notable for their artistry, according to Richard Doty. Writing in The MacMillan Encyclopedic Dictionary of Numismatics, he notes that the coins carry “some of the greatest masterpieces of Renaissance portraiture. Rulers are portrayed realistically, albeit with a grandeur elevating the renditions far above the merely representational.”

Testones of the Sforzas were widely imitated. The coins measure somewhere between the size of a U.S. quarter dollar and a half dollar.

The obverse of the testone in the Demarete Collection features a portrait of the scheming mop-haired uncle, with a slightly mischievous look on his face. The reverse shows the younger Sforza inside a beaded circle, with a softness reflecting his youth.

Silver testone depicts two members of the House of Sforza, one who is alleged to have killed the other.