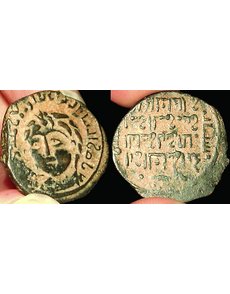 It is extremely likely that a coin inherited through an estate is a copper coin from the Islamic dynasty of the Artuqids, which dates back 800 years.

I was left this coin as part of an estate from a great uncle. Where is the coin from and what is its approximate age?

Vagi says, “The Kufic inscriptions are not complete on the coin, so no 100 percent guarantee, but a 98 percent guarantee that it is a copper piece of Nasir al-Din Artuq Arslan, of the Artuqids of Mardin, who ruled A.D. 1200/1201 to 1239.

“It should weigh about 6 grams (the range is from about 3.75 to 9.00 grams), which has caused some specialists to consider it a half denomination of the typical Artuqid copper ‘dirham’ unit. [Judging] from the photo there is an excellent chance it is genuine; if so, it is certainly worth [an amount] in the $150 to $300 range.”

The Artuqids were an Islamic dynasty that ruled an area encompassing parts of present-day Iraq, Syria and Turkey.

I have been collecting Presidential and Sacagawea dollars. Can you please tell me how these coins are classified as position A and position B? It seems that no one can agree as to what is what.

Regarding incused edge inscriptions on the circulating Presidential dollar coins and the Sacagawea, Native American dollars, Professional Coin Grading Service characterizes a “Position A” dollar coin as one on which the edge lettering is upside down when the obverse of the coin (portrait side) is facing up. If the edge lettering reads normally with the obverse of the coin facing up, PCGS calls this “Position B.”

Third-party grading services Numismatic Guaranty Corp. and ANACS do not make the “A” and “B” designation on their slab labels when grading and encapsulating the dollar coins.

The market assigns no value premium for a Position A dollar versus a Position B dollar, or vice versa. The edge inscription for circulation-strike dollars is applied completely at random by the Mint.

On Proof dollars the edge inscription is formed by a different process in Position B orientation.

The incused edge inscription has been used on Presidential dollars since first being issued in 2007. The edge inscription was added to the Sacagawea, Native American dollars beginning in 2009. The Sacagawea dollars of 2000 to 2008 do not feature edge devices.