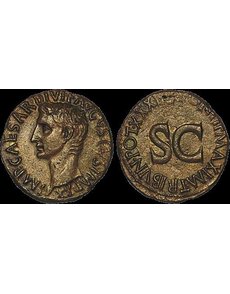 Caesar Augustus, who ruled Rome from 27 B.C. to A.D. 14, was emperor when Jesus Christ was born. This bronze as, larger than a U.S. quarter dollar, bears a portrait of the emperor himself on the obverse.

A bronze coin from ancient Rome, a shilling from Victorian England and an Indian Head cent all have deep connections to Christmas. Taken together, they make a surprisingly inexpensive holiday collection.

Caesar Augustus, who ruled Rome from 27 B.C. to A.D. 14, is perhaps the most famous ruler of all time. He was emperor when Jesus Christ was born.

Gospel writer Luke mentions Augustus at the start of the nativity story. “And it came to pass in those days, that there went out a decree from Caesar Augustus, that all the world should be taxed. … And all went to be taxed, every one into his own city.”

Augustus ruled for decades, at a time of relative peace and prosperity. He issued vast quantities of copper, silver and gold coins. Most show his portrait and many are inexpensive.

Impressive bronze asses, larger than a quarter dollar and boldly bearing a portrait of Augustus on the obverse, were issued for decades. Well-worn examples can frequently be found for $50 to $100.

Charles Dickens’ A Christmas Carol, the story of Ebenezer Scrooge, clerk Bob Cratchit and, of course, Tiny Tim, is perhaps the most beloved Christmas story of all time.

Money is mentioned frequently. Scrooge scornfully notes that Cratchit made just 15 shillings a week and still wasted time “talking about a merry Christmas.”

The shilling was a silver coin about the size of a quarter dollar. Because the story was first printed in 1843, Cratchit’s shillings would likely have been Victorian pieces showing the queen on the obverse and the denomination on the reverse. An 1843 shilling retails for about $20 in Fine condition.

O. Henry’s famous short story, “The Gift of the Magi,” opens with a reference to money.

“One dollar and eighty-seven cents. That was all. And sixty cents of it was in pennies. Pennies saved one and two at a time by bulldozing the grocer and the vegetable man and the butcher until one’s cheeks burned with the silent imputation of parsimony that such close dealing implied. Three times Della counted it. One dollar and eighty-seven cents. And the next day would be Christmas.”

The story about Della and Jim’s gifts of self-sacrifice and love was first published just before Christmas 1905 in the New York Sunday World Magazine.

Della’s 60 pennies would likely have been Indian head cents, possibly dated 1905. The 1905 Indian Head cent is a common coin, with a Coin World Coin Values value of $1.50 in Good condition and $30 in Mint State 60 brown.