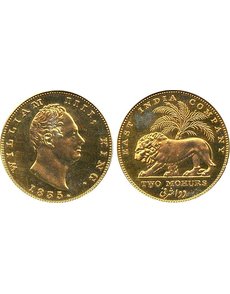 A collection of Indian coinage dominated Baldwin’s auction No. 71, the second of three official Coinex auctions.

The Yashoda Singh Collection of Indian Coins was built over the course of 25 years by a collector with a true passion for the history of the coinage of India, according to Baldwin’s.

Leading the collection was a Proof restrike of a famous gold coin, the 1835 2-mohur coins of British India. The 2-mohur restrike, graded Proof 63 Restrike by Professional Coin Grading Service, realized £10,620 (about $16,599 U.S.), with the buyer’s fee. All prices shown here reflect the fee.

All lots from the auction can be viewed for free at www.baldwin.co.uk/auction-71.