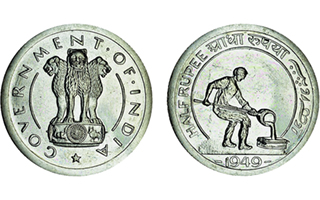 A rare pattern from the early days of India’s first national coinage after independence was sold in Spink’s March 26 auction.

The pattern wass from the collection of the late Patrick Brindley, who served as chief engraver for the Government of India’s mints at Calcutta, Bombay and Hyderabad from 1947 to 1961, according to Spink.

The 1949 coin was designed by Brindley. The reverse shows a foundry worker pouring molten metal, a design that was not adopted for circulation (a simple design of grain was chosen instead). The obverse shows the national emblem of India, the Lion Capital of Ashoka, a third century B.C. sculpture that once topped a commemorative pillar.

Though the pattern has minor contact marks in the fields, it is “otherwise as struck.”