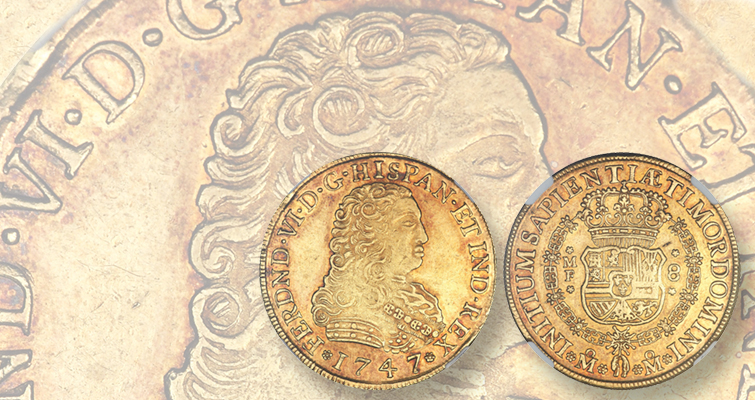 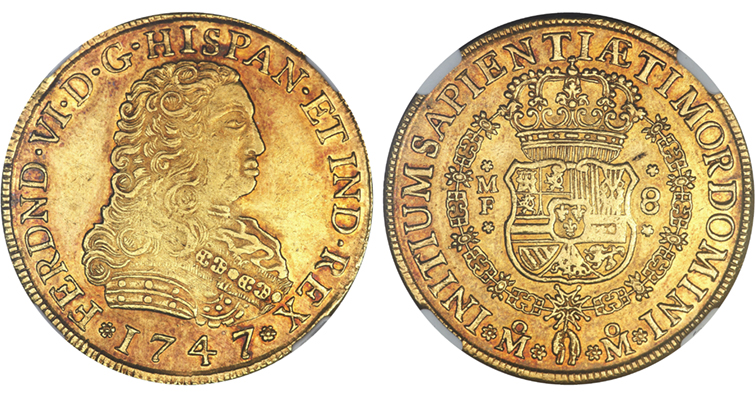 A 1747-Mo-MF gold 8-escudo coin of Ferdinand VI highlighted Heritage Auctions’ sale of part one of the Rudman Collection of Mexican Coins on Aug. 13. The coin, with the rare “Imaginary Bust,” realized $47,000 U.S., including 17.5 percent buyer’s fee.

The coin, graded About Uncirculated 58 by Numismatic Guaranty Corp., realized $47,000 U.S., including the 17.5 percent buyer’s fee.

The Imaginary Bust issue was struck after a Royal Ordinance of July 31, 1746, sent from Madrid to the Mexico City Mint, arrived in Mexico in May of 1747. The royal order called for a change in coinage legends and design to reflect Spain’s new king, Ferdinand VI.

Punches with the official Madrid-engraved bust of Ferdinand VI were received in Mexico City at the end of 1747, so “Imaginary Bust” issues of various denominations were struck only as a one-year type. The large 8-escudo coin is the most famous “Imaginary Bust” coin, though the other denominations are as rare or even of greater rarity, according to Heritage. The Rudman Collection is the first to offer a complete set of Imaginary Bust coinage.

For more details about the collection, visit the Heritage Auction website, www.ha.com.