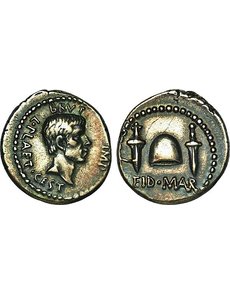 The Eid Mar silver denarius of Marcus Junius Brutus realized $546,250, including the 15 percent buyer’s fee, propelling the auction of 481 ancient Greek and Roman coins and antiquities to an estimated realization of $1.72 million. The ancient coins, along with five other sessions, helped the firm realize more than $20.3 million (see related stories at www.coinworld.com/categories/world-coins/).

David S. Michaels, director of ancient coins for Heritage, said: “The market for quality ancient Greek and Roman coins has never been better. Many of these coins sold for multiples of what the same pieces sold for less than a decade ago. The demand for truly singular ancient coins is simply going off the charts.”

The Eid Mar coin, which was struck in late summer to fall in 42 B.C., features a portrait of Marcus Junius Brutus, the lead assassin of Julius Caesar, on the obverse, and a liberty cap flanked by two daggers along with the legend EID MAR (for March 15, 44 B.C., the date Caesar was assassinated) on the reverse.

The example in the auction is listed as Nearly Extremely Fine/EF.

The full story of this rarity was reported in the Sept. 5 Coin World Special Edition.

The Eid Mar denarius was one of 26 rarities offered from the Rubicon Collection of Roman Coins, most of which featured famous Romans of the Imperatorial era.

Roman Republic, circa 46 to 45 B.C. gold denarius, Gnaeus Pompey Jr. as imperator, “perhaps fewer than 10 specimens in existence, of which this is easily the finest known,” Fleur-de-Coin, $63,250.

Roman Imperial, A.D. 14 to 37, reverse die for denarius from the Lugdunum Mint, “case-hardened bronze with a silver denarius of Tiberius (‘Tribute penny’ type) stuck in place,” “the presence of a silver denarius in the obverse indicates that during the course of striking, a denarius became lodged in the reverse die and caused the striking of an indeterminate number of brockages,” in custom wood and glass presentation case, $23,000.