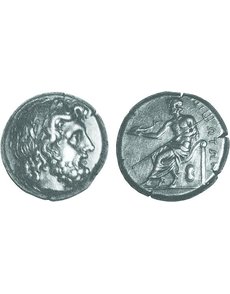 If genuine, a silver tetradrachm struck in the Greek city of Thebes in Boeotia circa 288 to 244 B.C. would be quite valuable. To know with certainty, the piece must be examined and authenticated by an ancient coin expert.

Enclosed are pictures of an ancient coin. It measures about 20 to 21 millimeters in diameter. Any information you can give me about this coin will be greatly appreciated.

The coin images submitted have the appearance of a circa 288 to 244 B.C. silver tetradrachm from Boeotia, an ancient (and current) region of Greece.

The leading city of the Boeotia region in ancient times was Thebes. According to Greek Coins and Their Values, by David R. Sear, Thebes was an arch rival of Athens and supported Sparta during the Peloponnesian War. Thebes was later conquered by Philip II of Macedon in 338 B.C., then later destroyed by Alexander the Great in 336 B.C. The city was partially restored by Kassander (or Cassander), a later king of Macedon.

The silver tetradrachm features the head of Zeus on its obverse and on the reverse a seated Poseidon, with a trident and dolphin.

One characteristic of coins produced by this region is the appearance of an oxhide shield. In these images, the shield appears on Poseidon’s throne on the coin’s reverse. The shield dominates the entire obverse on other coins of Boeotia.

If genuine, this tetradrachm would be an extremely rare coin. An example, described as being in Extremely Fine condition, realized a hammer price of $45,000 in a Classical Numismatic Group auction (Triton XI) in January 2008.

The description in the Triton XI catalog states: “After years of languishing under Macedonian rule, Thebes was granted autonomy by Demetrios I Poliorketes in 287 BC. Among the rights recovered was the right to strike civic coinage, and this magnificent Hellenistic tetradrachm was the first series for the rejuvenated city.”

More information on this coin can be found in The Coinages of Demetrius Poliorcetes, by Edward T. Newell, published in 1978.

As a genuine coin of this type is so rare, there is a high possibility that the piece owned by Mr. Lyons could be counterfeit. In addition, it could be a fake struck contemporary to the original pieces. To know for sure, the piece needs to be examined and authenticated by a reputable ancient coin expert.