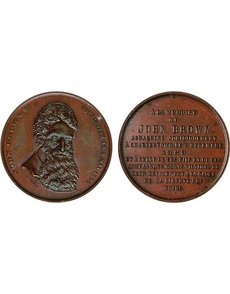 More than 150 years after John Brown’s death on the gallows, few Americans are remembered with such fervent controversy as is generated by the abolitionist leader (born 1800 in Torrington, Conn.; died at Charles Town, Va., Dec. 2, 1859).

Besides the Civil War song “John Brown’s Body is A-moulderin’ in the Grave,” Brown is remembered in numismatics by a striking 57.5-millimeter bronze memorial medal created by Jean Würden of Brussels, Belgium.

This rugged portrait was adapted from one of Brown’s last photographs, with his Old Testament patriarch’s beard sweeping his chest. Brown had been clean-shaven until the last year of his life.

The 11-line French reverse inscription is one of passionate advocacy, translating “To the Memory of JOHN BROWN, legally assassinated at Charlestown, the Second of December, 1859 and to that of his Sons and Companions, who died as victims of their Devotion to the Cause of the Liberty of the Blacks.”

Brown came to Virginia after a violent role in “Bleeding Kansas,” where he was a leader in guerrilla struggle between Southern pro-slavery bands of “Border Ruffians” and armed anti-slavery forces.

Here he gained his nickname “John Brown of Osawatomie,” for ordering the deaths of five pro-slavery captives during the protracted fighting. Brown claimed that their deaths by sword at the hands of his comrades were part of his defense of home and family from violence publicly threatened by his enemies.

Indeed, Osawatomie was subsequently plundered and burned by the slavery faction.

Brown returned East and launched his plan to establish by force a mountain redoubt for his supporters and escaped slaves who would form their own state. Brown supplied it with a constitution, president and cabinet, and an armed force.

He hoped that his new free state would draw escaping slaves from all over Virginia. He received money and arms from like-minded abolitionists in New England with the aid of the “Secret Six,” wealthy and vigorous backers of violent action, who later professed vagueness about their support for the subsequent fighting.

Four of Brown’s men were killed and 10 attackers, before Brown was captured, prosecuted by the state of Virginia and condemned to death.