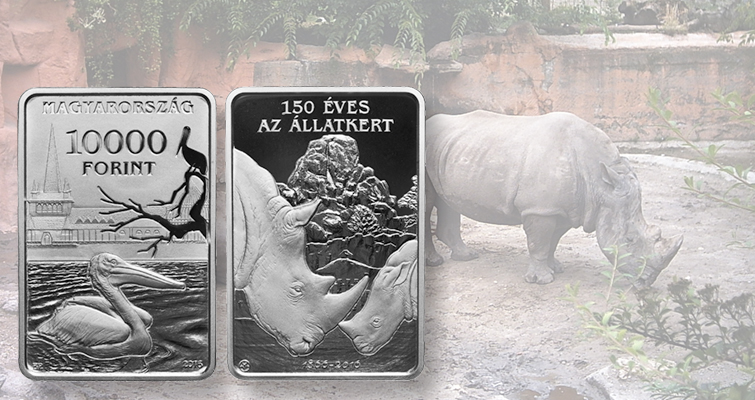 Hungary celebrates the 150th anniversary of the Budapest Zoo and Botanical Gardens with two collector coins, including this Proof .925 fine silver 10,000 forint issue.

The Hungarian Central Bank is honoring a milestone for the Budapest Zoo and Botanical Garden with two 2016 coins.

Both coins are rectangular in shape, with a vertical format for the designs, emphasizing some of the animals found in the zoo.

The commemorative coins are legal tender. Both coins are issued with identical designs, with the exception of the numerals that identify the face value.

The obverse features a swimming Eastern white pelican, an indigenous bird of the Carpathian Basin, with one of the emblematic buildings of the zoo — the Australia House (the former Aviary) designed by Károly Kós — in the background. The front also features the silhouette of a pelican sitting on a naked tree. The mandatory design elements are also on the front: the inscription MAGYARORSZÁG, the 10,000 or 2,000 numerals, the inscription FORINT, the Mint mark BP, and the year of issue 2016.

New this year on Hungarian commemorative coins is the appearance of security features in the mint mark.

The letters B and P are present in microlettering visible only when magnified at least 10 times. This feature offers protection against the counterfeiting of the commemorative coins, according to the bank.

The reverse of the coin features a Southern white rhinoceros and her calf, facing each other, a nod to the outstanding successes achieved by the zoo in its propagation program, as a result of which the first rhinoceros calf conceived through artificial insemination was born in Hungary.

The background of the reverse design features the Big Cliff of the Budapest Zoo and Botanical Garden (the work of sculptors Gyula Benke and Josef Botti, and engineer Gyula Végh).

The inscription 150 ÉVES AZ ÁLLATKERT in the upper part of the back and the years 1866–2016 in the lower part refer to the 150th anniversary of the zoo. The signature mark of Gábor Kereszthury, the designer, is in the lower left corner of the coin.

A maximum mintage of 3,000 of the silver coins are available during a three-month sales period, while a maximum of 10,000 base metal examples are available for sale indefinitely.

American distributor Coin & Currency Institute offers the BU coin for $19.50 and the silver coin for $59.50. 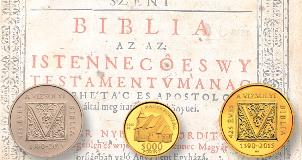 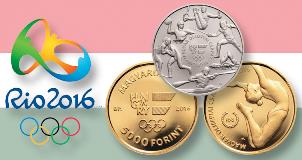 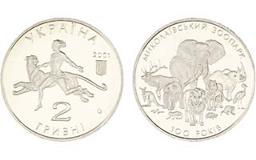